For some reason, the game contains duplicate versions of the Chemical General and the Stealth General. These duplicates are used in the missions: the duplicate Chemical General is used in the last American mission where you have to capture the Baikonur missiles, and the duplicate Stealth General is used in the second GLA mission with the rogue Stealth general. They contain some quite interesting ideas that didn't make it into the normal versions of these generals, and it's unlikely the developer team created two duplicate generals just for use in two missions, so they probably intended to have these eventually replace the "normal" versions of the generals. Their game file names are prefixed with GC, probably meaning "Generals' Challenge," but in fact the final Challenge versions are the regular, playable armies.

The developers seem to have planned a special Toxin Shells upgrade for the Rocket Buggy. The missile has some code that makes it leave behind toxin residue after the upgrade has been purchased. The upgrade also exists in the code but it has no button to purchase it.

GLA has a share of fake buildings to fool the opponent. Selection pictures suggest that a Fake Stinger Site, a Fake Tunnel Network and a Fake Scud Storm were also planned. However, they don't appear in the game, because they wouldn't make particularly good fake buildings.

The Scud Storm has a public timer and an EVA announcement so a fake Scud Storm would be easily distinguishable. The fake Stinger Site and fake Tunnel Network have the problem that they wouldn't shoot (seeing as they're fake), which makes them extremely obvious fake buildings.

This unused picture, called variously "GLA General" or "LeadGLA01" in the code, was likely to feature in the first GLA mission. In this mission you have to escort the GLA leader to the airfield. He probably was intended to be on foot, but in the final version, he's inside a limousine and uses a different selection picture, rendering this one unused.

The Saboteur was supposed to be able to steal cash from American Supply Drop Zones. However it was removed, probably because it gave America too much of a disadvantage compared to the other factions, whose secondary sources of income could not be infiltrated.

GPS Scrambler was supposed to come in three levels. Each level you bought would increase the area of effect. There are selection pictures for all three levels. The GPS Scrambler that's in the game only uses the first picture, leaving the other two unused.

It seems that the developer team created a new selection picture for the Radar Van Scan. The problem is that it uses the same name as the old selection picture in the game, therefore this one is overridden and never shown.

These two obviously belong together, but no idea where they are used. 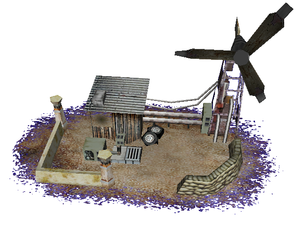 GLA was supposed to have a source of power! This windmill was supposed to power up the GLA buildings. It shows up in some pre-release movies too, it was removed to make the GLA different from the other factions and more similar to real life by not requiring power. However, there's still quite a lot of windmill residue in the game's code. 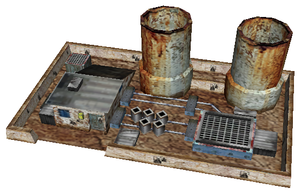 Strangely, the windmill becomes this underground generator under night conditions. Maybe that was the original idea for a GLA Power Plant, or the windmill simply turned into this during night (though why it would do this is beyond anyone's guess). 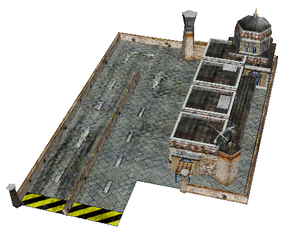 If the above two buildings weren't enough, there's also an Airfield for the GLA. This one however is just a leftover of the prototype, as it looks different from all the other GLA buildings, and more similar to other prototype assets. In any case, while its design is rather interesting, it was removed simply because the developers did not want GLA to have aircraft. 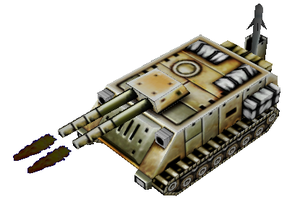 This is an alternate, "boxy" design for the Scorpion tank. Actually it looks quite a lot like the Scorpion originally planned for the Chinese, and it was most likely based on it. However, the developers preferred the other model and left this one unused.

The Chemical General gets a RPG Trooper which shoots Anthrax Missiles, with a unique model carrying a tank of anthrax on his back. He was also intended to get a new selection picture, which is only used by the "duplicate" Chemical General that appears in the final mission of the American campaign. There are also a bunch of new voices for the Toxin RPG Trooper, which are not used at all.

Demolitions General was supposed to be able to build the Saboteur. He would be able to place explosive charges just like Jarmen Kell. The voices remain, but he was never implemented.

The Demo Traps of the Demolition General are already quite powerful by itself, but the developers planned to have them upgradable with High Explosive Bombs, which would double the damage.

The Battle Bus of Stealth General was supposed to get the Disguise ability of the Bomb Truck, allowing it to disguise as any vehicle on the battlefield. It is only used by the duplicate Stealth General's Battle Bus, but since he can't build the Battle Bus, you never get to see this ability.

The fake buildings of Stealth General were supposed to be able to get Camo Netting, just like their real counterparts. However, it's not actually possible to buy this upgrade for the fake buildings, because the developers forgot to add the upgrade button.