Cyberchase The Quest: Mission Motherboard and Race for Radopolis (Flash)

Cyberchase The Quest: Mission Motherboard and Race for Radopolis are the first two releases in a series of web games based on the Cyberchase TV series. Unlike the third and fourth installments, these two games share all of the same files, with the differences between them being the storylines and specific quests the player must undergo. Both games were later remade in HTML5 with numerous edits (including cutting several areas and characters), so unused content from the Flash version did not carry over to the HTML5 re-release.

Each of the NPCs that the player can interact has their own .swf file with graphics, code, and dialogue text. One of the character files is for Ivanka, the ghost of a cyberpirate. Although she is mentioned in the game's encyclopedia feature, the Skwakopedia, her character file goes unused. She would've appeared in the Castleblanca location since her file is located in the directory for Castleblanca character assets. Unlike the other NPCs, her file contains hardly any code, and the array where her dialogue text is supposed to be stored is empty. Curiously, the Skwakopedia entry about Ivanka mentions her having a famous treasure, and there is a treasure chest in Castleblanca that only plays an animation of bats flying out when opened and seemingly serves no other purpose. It's possible that her appearance would've originally been linked to this chest somehow. 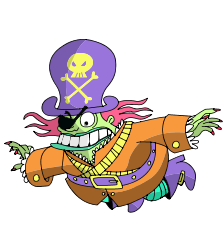