The source code for Raid 2020 was released online in late 2019 and contains several early assets.

These title may sound wrong, but it makes sense considering the files in the game's source code, what they contain, and how they contain it. The source code has .DRW files that are read on Color Dreams' NinDraw, and these contain sprite and background assembly, animations, and palettes, but not the actual art that is used in them. That art is stored in .VID files. There are 4 .DRW files, CZAR1-CZAR4, each for a level in the game, and I believe that none of them are final versions.

In CZAR1, you can find this tiny boot, named ARMRBOOT. It looks like a smaller version of the boot item which protects you from mines.

In CZAR2, you can find this weird looking sprite, made out of parts of one of Shadow's vehicles in the Swamp level. It's called "ENMYBOAT", so it can be assumed that it was to be an enemy boat at the swamp level.

Despite being called OLDGATOR, this sprite is made out of a shark fin on top of a chopper wing. Not sure what this one could have been but a different or early version of the alligator enemy on the swamp level.

This sprite called CYCLE1 shows Shadow riding a motorcycle. Shadow can do that in the game but he uses a completely different sprite.

This broken sprite is called OURSHIP, and with that name, we can assume that this was at one point the ship that Shadow can ride in this stage of the game.

Pitbull's warehouse also has graphics CYCLE1 and OURSHIP. It is unknown if it's just a leftover, from using the previous level as a base to make this one, or if Shadow was meant to have vehicles here aswell.

Another messy sprite, this one's called KEYRAT. Assuming by the name and its size, it might have been intended for a special version of the rat enemy that appears in this level, that carries the key to the Pitbull's room. That key still is an objective of this level, but it's aquired in a different place, that uses a different graphics bank.

Another key-related unused sprite, but this one looking like a ceiling turret painted green. Like the sprite before it, PITKEY also seems to be a reference to the key that is one of the objectives in this level.

TNTCARD is probably an early version of the actual Access Card that makes things go TNT in this level.

This sprite is called LUGI. That's all I can say.

This file has a really really fast animation called HVRING, made from the objects HVRING1 and HVRING2. Objects in NinDraw are actually tileset parts, so this animation was to animate something in the background, instead of a sprite. HVRING1 and HVRING2 don't actually exist anymore though, so the animation isn't animating anything, and appears as blank.

This animation called HOVERING looks to be an early animation for an enemy on the spaceship battle level, HOVER. All that's early about it though is that one of the tiles is wrong. 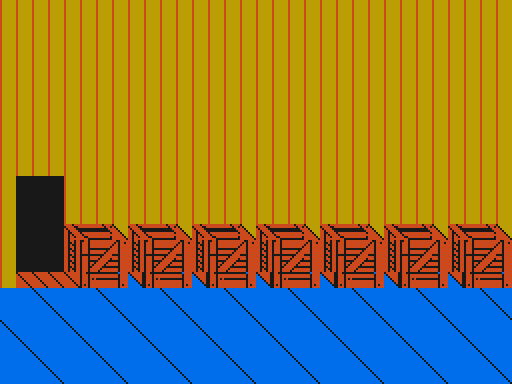 In CZAR1 there is an early version of the shack you can enter in the pier that has no shelf.

In the game's source code, you can find files that contain early versions of the game's graphics. These are .VID files, that only contain the actual art that goes used. They literally are graphical banks.

ALL's graphics are identical to the final version, CZAR's are barely different, but C1's graphics are so early that they don't even fit Shadow's palette well anymore, and many of the objects don't actually have any graphics drawn for them in it.

CZAR2.VID (The swamp and docks & the spaceship battle stage)

CZAR2's graphics are closer to the final version than ALL's.

This one's actually divided. CZAR3 and ALL both have differences and different similarities to the final version's graphics.

In this one, ALL seems to differentiate itself in the sprites more than any other time.

In the game's source code, there are two music tracks that didn't make the cut. The code is written in a way that they're not compiled with the ROM, but they can be, and this is how they sound like:

These were undoubtedly supposed to be in-game songs, seeing as they only use audio channel Square 1 and also loop, two characteristics shared with the in-game theme we got in the final version.