Frustrated by how hard smart kids are to scare, the incompetent magician I.M. Meen entraps a bunch of goody-goodies in the confines of his magic labyrinth. It's up to you (and Gnorris) to free his prisoners and destroy his labyrinth by correcting the bad grammar in his books, letters, and scrolls. This is an edutainment game, after all.

Unfortunately, the developers of this game also created those Zelda CD-i titles, so it got pulled into the same infamy as them.

A sequel, in which Meen's girlfriend literally rewrites history, was released a year later.

Four unused scrolls can be found in L_SCRL.PRC, the archive which holds the text for all of the game's scrolls. They are basically complete, having both grammatically correct/incorrect versions and entries for all three Reading Levels. They were most likely cut due to a lack of available cell doors.

It should be noted that the scrolls themselves are ordered somewhat arbitrarily within the archive itself, but they are presented roughly in chronological order. For the purposes of readability, all changes between the Reading Level variants are highlighted in bold lettering.

A note about a Meenwall that opens up a sliding wall. The scroll is so generic that it could've been used anywhere in the labyrinth.

A page from Meen's self-insert space opera. Its position in the scroll text archive places it somewhere in the Tower.

A scroll describing a hidden room in The Tower 4 in great detail. This hidden room doesn't actually exist in the final game: the closest equivalent in the level has an extra Explode-O-Fruit and no Stealth Sneakers. There's another, much more vague scroll discussing a hidden room on the level that ended up being used.

A entry in Meen's diary that would've been found in The Library 2. It gives hints as how to find two of the hidden items in the level.

The areas in question have been highlighted in light red. 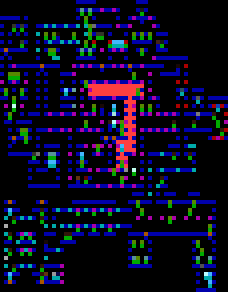 The first map of the game, The Tower 1, has an inaccessible hallway in the central maze which contains two Trolls and an Explode-O-Fruit. There's no clear reason as to why the hallway was cut. 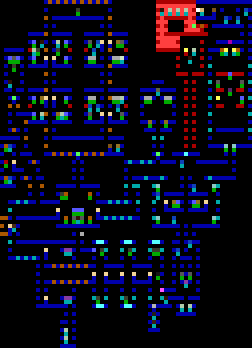 The Dungeon 4 has a entire inaccessible secret path. Starting at a now-deleted door in the Winter Wand room, the path would've given the player three Explode-O-Fruits and a Storm Wand before exiting out into the used Storm Wand room. Probably cut for balancing issues - the level already contains a bunch of weapons as is. 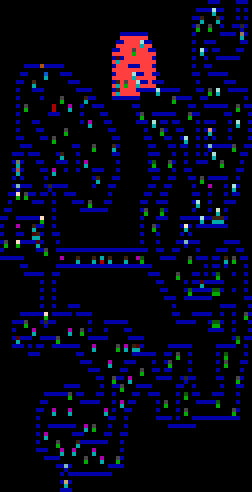 The Caves 4 has a inaccessible room near the top of the map which contains three Lizard Men, two Explode-O-Fruits, and a Power Potion. It was most likely a hidden area that never had its entrance finished for one reason or another.

A second stained glass window tile is loaded in the Tower levels, but is never used. Compared to the first one, this window has a stone border on top of it as opposed to a metal one with an engraved cross.

Loaded alongside the unused window are two wall tiles that normally appear in the Dungeon. Interestingly, the tiles aren't just mere palette swaps - they have minor differences in their cracks and shading. The first wall tile would be edited and reused in the Hedgerow Maze.

Two wall tiles for the Sewer are unused. The first is the clean Sewer brick tile with "GNED WAS HERE" scrawled on it. It was most likely meant for a hidden area, either through marking the area's entrance or appearing in the area itself. The second is a Sewer version of the door frame tiles seen in the Catacombs, and was almost certainly meant for the same purpose.

A wall tile meant for a destructible wall in the Catacombs (specifically, the first two levels) which was never implemented.

The Castle has the most unused tiles by far, coming in at a whopping six! From left to right:

Much like the Catacombs, the Laboratory was meant to have destructible walls at one point.

An unused variant of the floor tile seen in The Catacombs 3 exists. The surface is lighter and has more gold specks, and the cracks are more detailed and darker.

A stone floor tile meant to appear in the Hedgerow Maze, which bears a resemblance to the unused Catacombs tile mentioned above.

The floor tile used in The Laboratory 1 and 2 has a variant that has a brown stain (soda?) on it. A similar tile is used in the Dungeon to mark a hidden area, so this was most likely meant for the same purpose.

The Library's levels load in a garish, green version of a ceiling seen in various levels, but never actually uses it.

An unused attack animation for the Spider where it spits out a green projectile. This idea might've evolved into the Giant Ant enemy, which is just a slightly modified Spider.

Meenmouth's attack animation has two unused starting frames, in which it starts off laying prone before getting up to blast the bookworm with fire. This could've been used for Meenmouth's death animation as well, given that both animations share the same two opening frames.

There is an unused pillar sprite which seems to be a fusion of two other pillars seen in-game. It is loaded in the Catacombs and Library.

All of the tables in the Library are lit up by ceiling lights and tend to have books and/or quill pens on them. As a result, this plain & boring variant is never used.

This sound was meant to play when activating the wheel switches in the Sewers, but they use the generic button push noise instead.

A sound meant for Sludgemeen. There are two possible places as to where it would've played;

This jingle is referred to internally as "Win_Fight_Fanfare", and was meant to play when enemy fights were won. Possibly cut due to how grating it would've gotten after a long enough period of time.

For whatever reason, this track isn't in the Hedgerow Maze's LAB files.

This longer jingle would've been played after completing the last scroll or during the credits, as it's in the data for the Library levels and is referred to as "Win_Game_Music" in the executable.

While this jingle is used when the player loses all health, it abruptly ends after a second, leaving the rest of the song unused.

A long list of object/sound names, debug strings, and file paths can be found near the end of IMMEEN.exe, starting at 6F884. For those who don't have much time to spare, here's a rundown of interesting findings within the list;