M.C. Kids is a platformer reminiscent of Super Mario Bros. 3 that entails two little boys chucking blocks at animals. It has very little to do with McDonald's, really.

Pressing Select on Controller 2 will freeze the game for one second. What purpose this may have originally served is unknown. 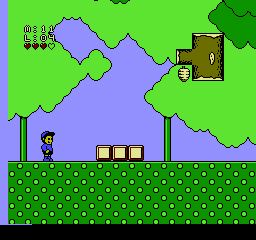 An unused beehive object, which originally appeared in the prototype. It has no behavior defined in either version of the game, and cannot be interacted with. Some tweaks to the final ROM can restore it to its original location, as shown in the image above (see the Notes page for details).

A bird enemy, which was also unused in the prototype.

Two fully animated enemies can be found in the sprite graphics for the Moon levels, along with some strange objects. These enemies are only present in the final game.

The game has a secret function that gives you infinite lives if you collect all the Arches in all three stages of Ronald's PuzzLeWoRlD. However, due to a bug, it doesn't trigger properly.

There is a bitfield at address 74B that keeps track of whether you've collected all the Arches in one of the three stages. A function is supposed to flip the first three bits if it detects you're in one of these three stages and have collected all the Arches. The problem is, the function is only called when you're in the end-of-stage cutscene, which technically takes place in a different stage, so the function clears your Arches count and does nothing else. The only way to get the function to work properly is to collect all the Arches and then die on purpose. The function will then run properly and flip the appropriate bit.

Once you've collected all Arches in all three stages, you can head to Ronald and he will give you "infinite lives" (which flips the fourth bit). It's not the true deal, though: while your lives count does get set at 99 and dying once will not decrement it, if you die again the counter will go down as usual. If you get down to 95 lives and then die once more, you'll get sent to Ronald who gives you infinite lives, for real this time. This flips the fifth bit and clears all others.

With the publisher changing from Virgin Games to Ocean in Europe, the opening screen was changed accordingly.