This is a sub-page of Minecraft: Java Edition/Version Differences.

It is an update that added a lot of pretty things, and not to mention scary things, into the game. This was well demonstrated by Mojang at the time: 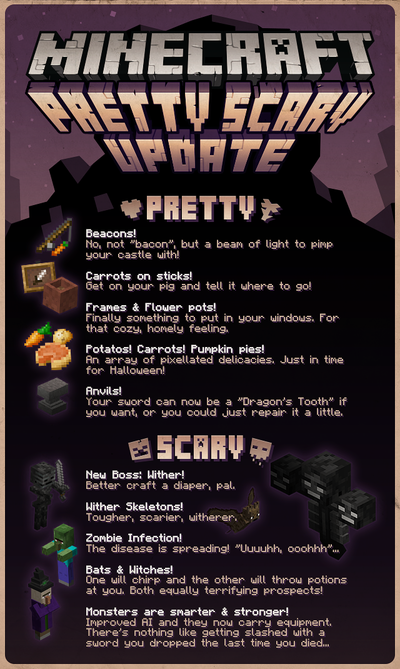 The update was also released in two parts: 1.4.2 and 1.4.6. Despite this, all the snapshots and releases will be posted here.

All of the other releases (shown below) are too small to put on their own sub-page.

The music disc "wait" has been added.

/enchant is a new command used to give specific enchantments to tools and weapons.

When in Creative mode, flying through cobwebs does not slow the player down, but walking through them will.

Baby mobs are now spawnable by right-clicking a mob with a corresponding Spawn Egg.

Squids now die when they are not underwater.

29 bugs have been fixed.

74 bugs have been fixed.