Trivia: Mr. Bean has no credits, only copyrights.

Present in the file MB_Settings.ini are a bunch of settings. Changing these enables the respective debug feature.

Enables an extra entry on the main menu: "Debug Mode". This acts as a level select to all areas of the game. Also adds "All Jigsaws", "All Biscuits", "All Teddies" and "Level End" options in the pause menu.

When the game is started, makes it go straight to the first level.

Enables a language indicator in the top-right corner and the ability to press L and R to cycle between languages.

Adds "V1.7" to the bottom-right corner of the top screen.

A similar settings file named Game.ini can be found in the PS2, Wii and Windows release. Setting a value to 1 enables an option, while 0 disables the option.

Displays "Version 3.5 SLES-54666" for the PS2, "Version 3.9" for the Wii and "Version 5.2" for Windows on the top left corner of the screen. The version is actually right above the options in Game.ini and can be changed to other values, but will round up to the first decimal place. Setting a non-number value defaults it to "1.0".

Skips the opening credits and logos. 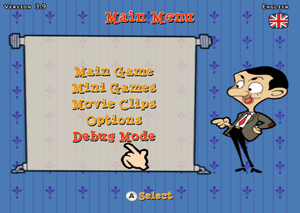 Enables a debug menu that can be selected from the main menu. This also enables a free camera and a real-time language changing option.

The free camera can be activated by pressing R2 on PS2 and F1 on Windows.

The language can be cycled through at any time during the game with SELECT on PS2, Minus (–) on Wii and L on Windows. 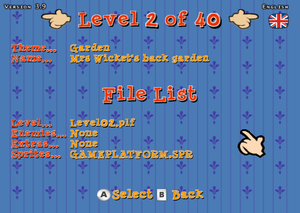 The debug level select menu displays the theme and name of each level, as well as the internal file name and what sprite file is used. Enemies and Extras always say "None" even if a level features both. 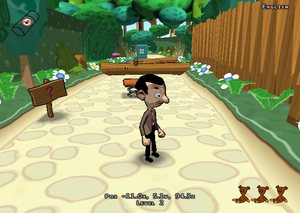 A basic debug display also appears while the main debug option is enabled. It details the player's x/y/z position, and the level number in accordance with the level select menu. 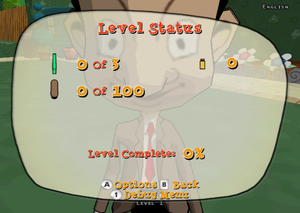 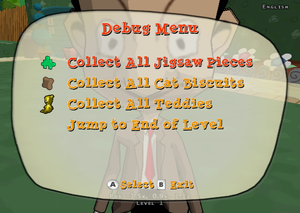 Enables a menu in the pause menu that can give all of a specific item for a level. There's also an option to jump to the end of the current level. This option is automatically enabled with EnableDebugMenu on PS2.

The Windows version has additional debug options available if the game is running in windowed mode under the View tab. 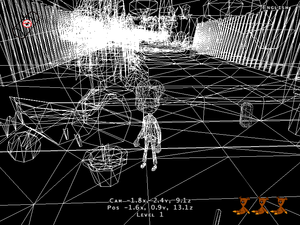 There are four different render modes: the regular one, a solid color one where everything is white except the outlines, a lined wireframe and a dotted frame mode. 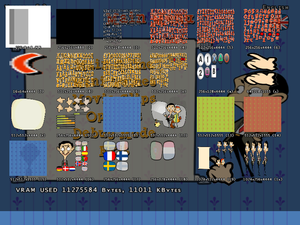 This menu is also present in the PS2 version and can be enabled with this code. Zooming on PS2 is done by pressing R2 and L2. 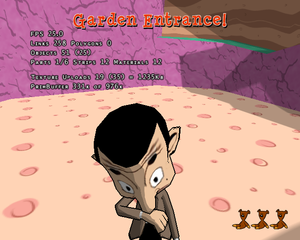 This option only seems to work properly on PS2, displaying the current performance and usage metrics. 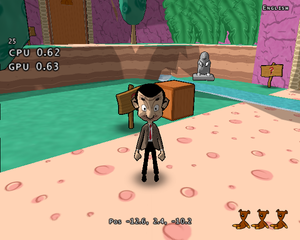 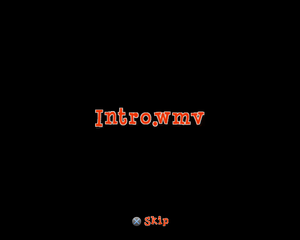 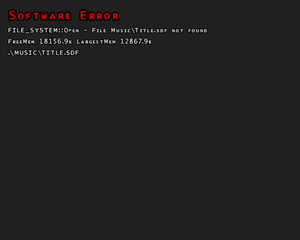 A broken option that's only present in the PS2 version. Enabling this option displays the frame rate, CPU and GPU usage, as well as enables the coordinates, version display and language selector regardless of the GAME.INI settings. Having this option enabled also has some other unusual side effects such as the game being guaranteed to almost always crash and give a Software Error screen if it's enabled on loading screens, as well as displaying a placeholder Intro.wmv cutscene.

To minimize problems, the display can be toggled by pressing R3 + UP and R3 + DOWN.

Present in ENGLISH.TXF, grouped together with the bonus clip text.

Only in the Wii version are a couple of batch files that can be found in the root directory of the game disc.

Also only in the Wii version of the game is a folder named game.elf_Data. Inside are two files that were originally from the debug version's project folder. CWSettingsWindows.stg contains all of the settings for the project, while TargetDataWindows.tdt contains a file listing of the entire codebase and brief descriptions of each file.

a sound of Mr. Bean laughing. may be used when you beat a level.