New Super Mario Bros. Wii takes the revamped 2D side-scrolling action from the DS title and kicks it up a notch by what many fans would consider a dream come true: simultaneous cooperative multiplayer in the main game. It also marks the return of Yoshi, the Koopalings, and Kamek, and pretty much set the standard for the Mario universe in the years that followed.

From February to March 2010, Nintendo hosted a Coin Battle tournament in Japan (NewスーパーマリオブラザーズWii コインバトル日本一決定戦). This apparently used a special version of the game. There was also a "Coin Battle Championship" in Italy and a "National Coin Challenge" in Australia, but for the latter at least, it seems like the retail version of the game was used.

There are a few leftovers from the E3 2009 demo (which was also used at later events that year).

This was shown on the title screen.

Displayed when the session ended.

"timeUp_trialPlay" is the session-end screen layout and is present in the Korean and NVIDIA Shield TV versions.

There are a total of 82 hint movies. While 62 of them are used, the rest of them go unused. They mostly contain Super Skills, and are broken due to the level layout being different from when the inputs were recorded.

The Big/Medium Goomba model has one unused animation in which it becomes flattened. It is different from the small Goombas' flattening animation.

These both were likely used with early versions of the model, because they do not fit the current bone structure of the model and look wrong when these animations are used through hacking.

As seen in this video, if Yoshi is hacked into a tower/castle level, he has an unused animation at the beginning of the boss fight that is similar to the one Mario, Luigi, and the Toads use. This suggests that players were able to carry Yoshi across levels during development (similar to Super Mario World), but this feature was scrapped at some point. 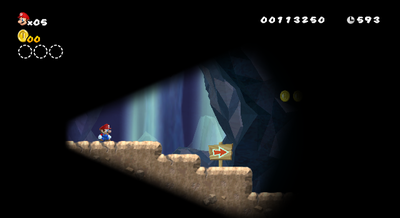 There is an unused darkness setting which causes triangular light beams to be generated by each player. The beams face the same way as the players and each can be rotated between 0 and 180 degrees by tilting the relevant Wii Remote.

First message in the file with obvious purpose. In the Japanese, USA Spanish text, it is the same, the meaning is the same, except there is no "1" on the end.

Seems to a label for the main mode on the menu.

Seems to be text for an early/scrapped multiplayer mode.

Another piece of unused text for the main menu.

These aren't capitalised in the final Free for All, but they are in the early multiplayer mode that was seen in the E3 2009 demo. "SCORE" is "トータル" ("total") in the Japanese text.

A leftover from the early multiplayer mode that was seen in the E3 2009 demo.

Many, if not all, the sounds that were in NSMB are also present here with their original filenames. They aren't listed below.

There exists a single unused track in the game, named cheepfanfare_lr.ry.32

The BRSAR has a entry called "STRM_BGM_DEMO_OMAKE" (demo = cutscene, omake = bonus), but there is no BRSTM to go along with it.

566 - SE_OBJ_GET_COIN_OLD
A coin sounds similar to the SMB and NSMB coin sound, but cut off earlier and with a slight echo.

686 - SE_OBJ_RC_LIFTLINE_MOVE
Inaudible. Possibly refers to the Wii Remote-controlled on-track lifts, as the sounds for those come right before this one.

868 - SE_VOC_MA_THANK_YOU
Inaudible. There is no equivalent for the other players.

1080 - SE_VOC_ITEM_KO_CRY_FAR
Inaudible. "ITEM_KO" refers to the Toads that Mario has to rescue.

1561 - SE_PLY_FOOTNOTE_CS_YOSHI
You can't bring Yoshi onto the World Map. This might just be a case of copy-pasted in-level footnote sound effects, rather than evidence that it was planned for the player to be able to bring Yoshi on the map.

In prerelease screenshots, we see that the game originally had a Red and a Blue Yoshi. They were changed to Pink and Light Blue in the final version. The filenames for the Yoshi models, though, still follow the old colouring: Y_tex_red.arc, Y_tex_blue.arc.

The game was originally going to have Mega Mario, but it seems to have been canned very early on - EN_ITEM (the actor which manages the various powerup items) has an empty value which loads a mushroom model from I_big_kinoko.arc, but it crashes the game when used, and it does not have any other code which uses the value. There is no way to enable it without ASM hacking.

The file I_big_kinoko.arc does not exist, and it is not referenced by the game otherwise. Also, as other evidence of Mega Mario having been planned, the "flying pipe" objects were ported over from New Super Mario Bros. but are not used in the final game.

Most of the brick blocks in the credits scene have contents chosen randomly at runtime (between "empty," "one coin" and "15 coins," weighted unequally). However, two names are overridden to always have the same contents. Executive producer Satoru Iwata's name is spelled out using 15-coin bricks. More unexpectedly, though, coordinator Rina Yamauchi's bricks are always empty. Since most of the random bricks are selected to be empty anyway, it's unlikely that anyone would ever notice this without hacking.

Each zone in the game can have a "theme", which changes how things are rendered, adds effects and so on. But some levels are set to themes that are indentical to the default overworld theme, rendering them useless. The following "useless" themes are used:

The exception handler is still in the game's code, but can't be seen normally without hacking or causing an exceptionally heinous glitch. When it does crash, press HOME, -, +, -, +, 1, 2, 1, 2, A on Player 1's WiiMote. The player will then see the processor state at the time of the crash, as well as some trace info.

The project's internal name is "wiimj2d" or just "mj2d" (mario journey/jump 2d?), according to multiple filenames.

Four empty files exist in the main folder with filenames listing build dates and some kind of build number.

A file called WIIMJ2DNP.str is present in the root folder and lists the locations of some partially-linked code. "WIIMJ2D" may be the game's internal project name - it is used for the save file's filename too. This file is actually used for something as the game crashes if it is deleted or overwritten.