Niche - a genetics survival game is a turn-based game for PC revolving around breeding animals in order to keep them alive.

There is an unused model called "ears_crumpled_medium". Interestingly, while it is unused in-game, it is used in the art on the Steam store (although this is a drawing, not a screenshot, but all other genes seen in this image besides fur colors are used in-game.) There are no textures associated with this model.

An unused tail gene. There are no textures associated with this model. 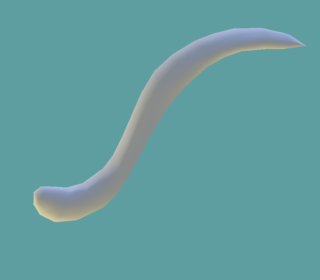 This enemy appears to have been cut very early in its development, as only code remains. It seems to have had a chance to spawn in place of insects, implying it was primarily present on swamp islands if it was present anywhere else at all. Nichelings were able to either attack or attempt to attack it. There are no models or textures associated with this enemy.

Most non-nicheling creatures are combinations of two real-world animals. Judging by the name, the frogleon may have been a cross between a frog and chameleon.

There is a full tutorial told from the perspective of Eve. It consists of screenshots of what seems to be Early Access version 0.0.4, with text boxes overlayed on top to give information.