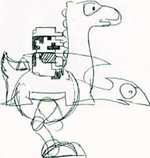 As seen in this video, some gameplay of World 1-1 and what appears to be 1-5. The footage shows that at least the basic mechanics were already functional, but the levels are still in an early state. Notably, the game's intro is very close (if not identical) to the final. Notice that there's also no sound. The timer seen in every level also goes faster.

At this point, the status bar does not display the world, instead saying MARIO in all-caps. The early retail boxes had a couple of screenshots using this status bar.

Another change appears during Mario's growing/shrinking animation. Rather than using a unique sprite for the inbetween frames, like in the original Super Mario Bros., it instead uses his crouching sprite.

Begins normally, albeit with the first two sets of ? Blocks too far to the right of where they are in the final, but starts looking rather different after the first pipe: the ? Blocks are placed differently, as are some enemies and platforms.

Mario jumps through some water, passes over a tall one-space-wide gap, then continues through some more water before getting to an area similar to the "low path" of the final 1-5. The screen then shrinks down to show pricing and release information.

As seen in this video, there are mostly screenshots of some interesting levels featured that are completely gone from the final. The old status bar is still present, and it appears that the Cards were displayed as monochrome outlines at this point instead of being filled in with white.

The only section of "live" gameplay in the entire video shows Mario kicking a Koopa shell and breaking the blocks. The layout here is clearly an old version of World 1-3. The strange looking "wood" block on the right side of the Famimaga footage structure is possibly an old version of the square "wood" blocks found frequently in SMB3. The ground is also taller and there are two red Koopa Troopas instead of one, among other differences, including the lack of sound still present. 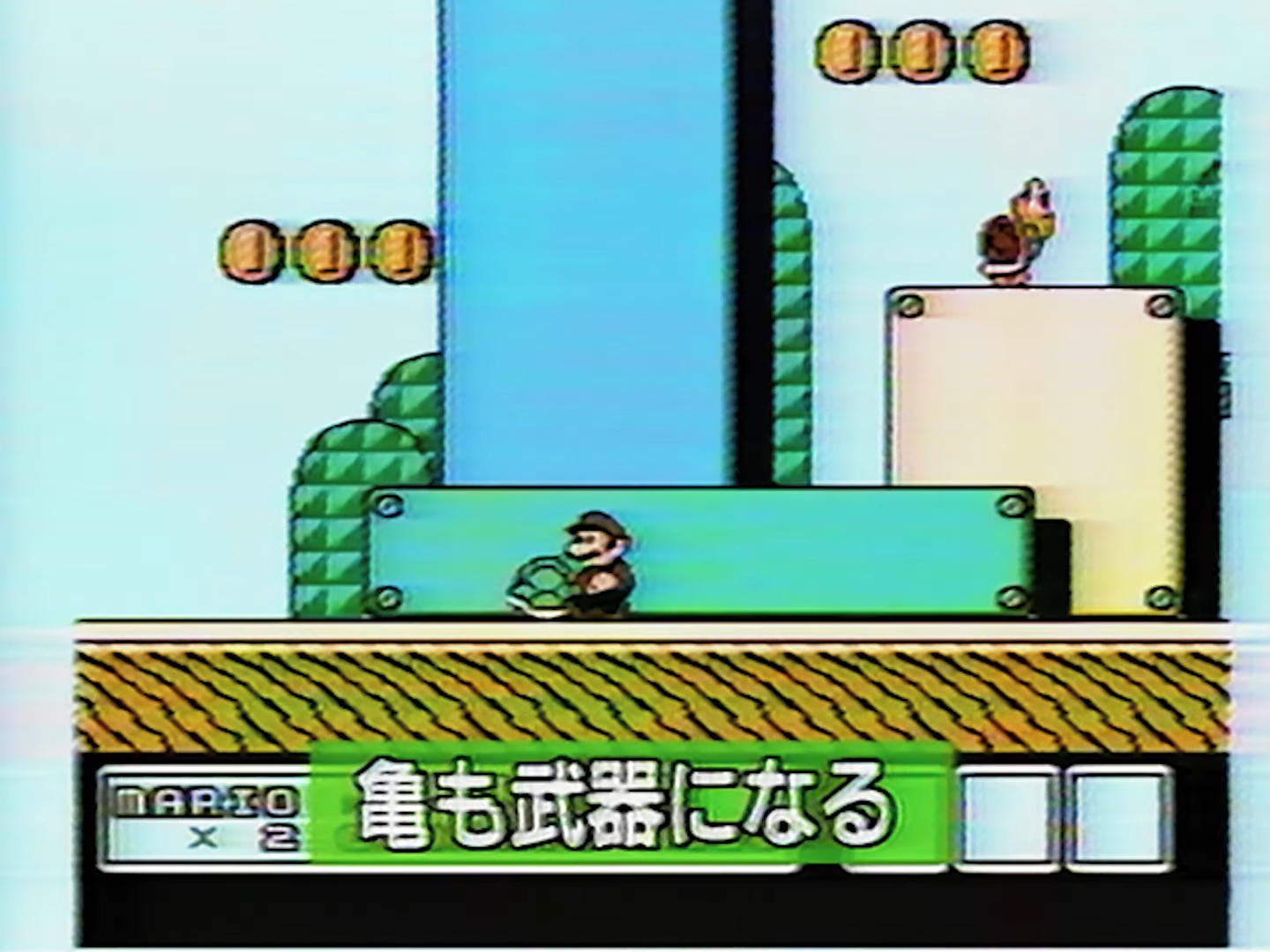 While this is a still in the video, this area is actually briefly seen to the left of the first screenshot above. All of the blocks and the red Koopa Troopa are gone in the final World 1-3; only the large background bush remains, with a Boomerang Bro in place. The caption in Japanese just reads "the turtle (referring to the Koopa Troopa) also turns into a weapon".

A "hilly" level with Para-Beetles flying through. This exact screenshot also appeared on the early SMB3 box, which is clearer and has some TV-esque "curving" around the edges. Note that Mario is slightly too far to the right.

This level has a slight resemblance to Unused Level 3, as they share a tileset and background. Unused Level 3 also has no ground enemies, so it could have also used the unused Para-Beetle Swarm sprite, but that spawns both red and green Para-Beetles, while this screenshot only shows red ones.

Additionally, the Super Leaf was originally green, it was changed to brown in the final. Curiously, in the final game, Super Leaves stored on the player's inventory are still green. 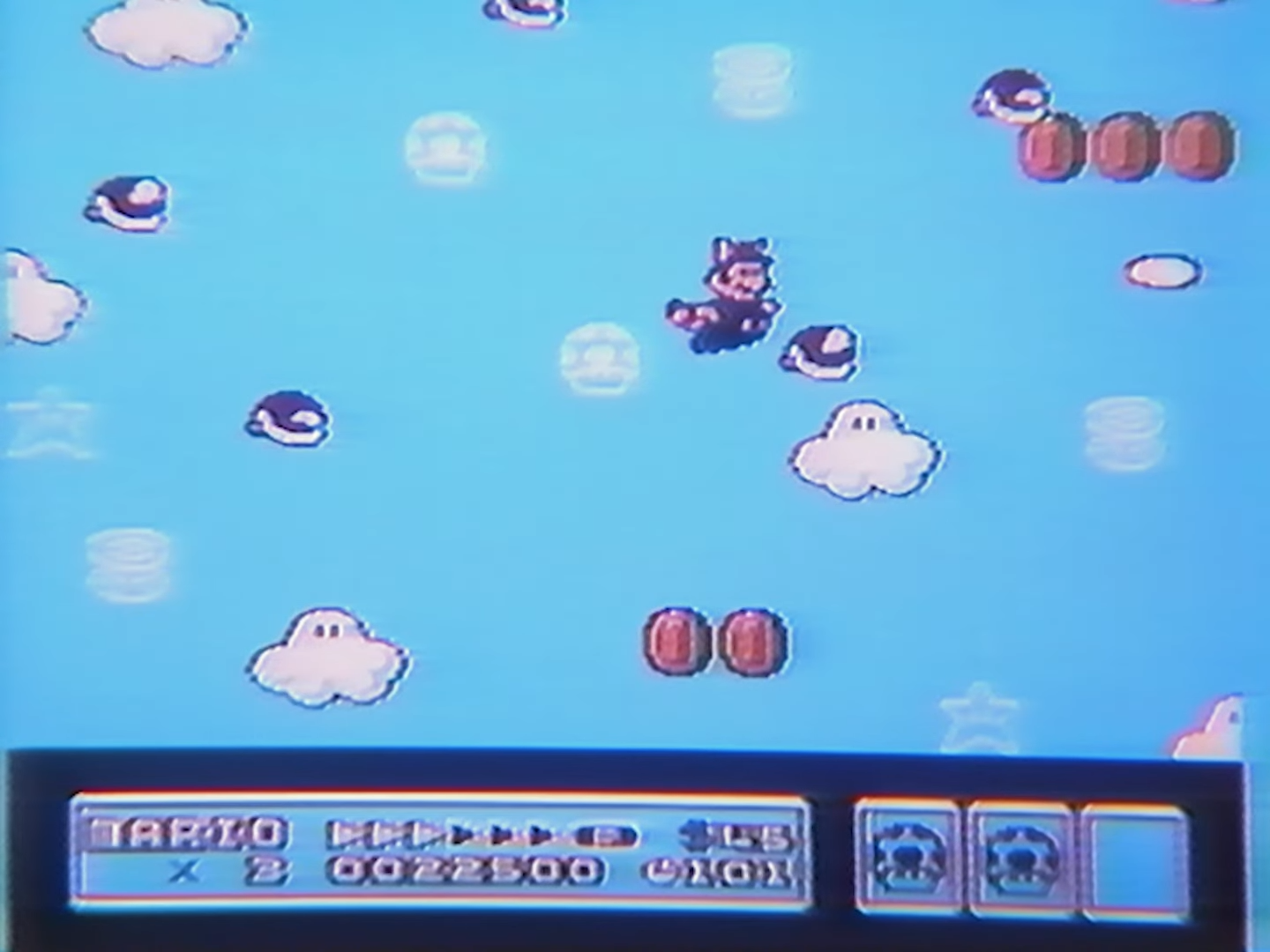 Another screenshot with Para-Beetles. Not only is the HUD exactly the same as the previous shot, but the Para-Beetles, some clouds, and the top row of coins are in the same positions. Again, Mario is too far to the right. 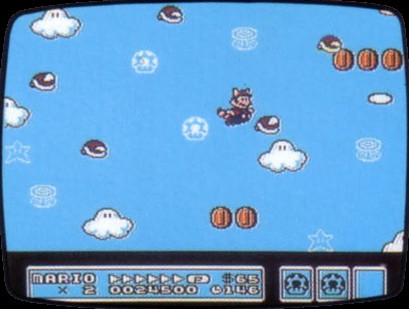 A variation of the above shot, with different stats at the bottom. Compared to the other shot, this is clearer and has some TV-esque "curving" around the edges.

All of these use the old status bar. 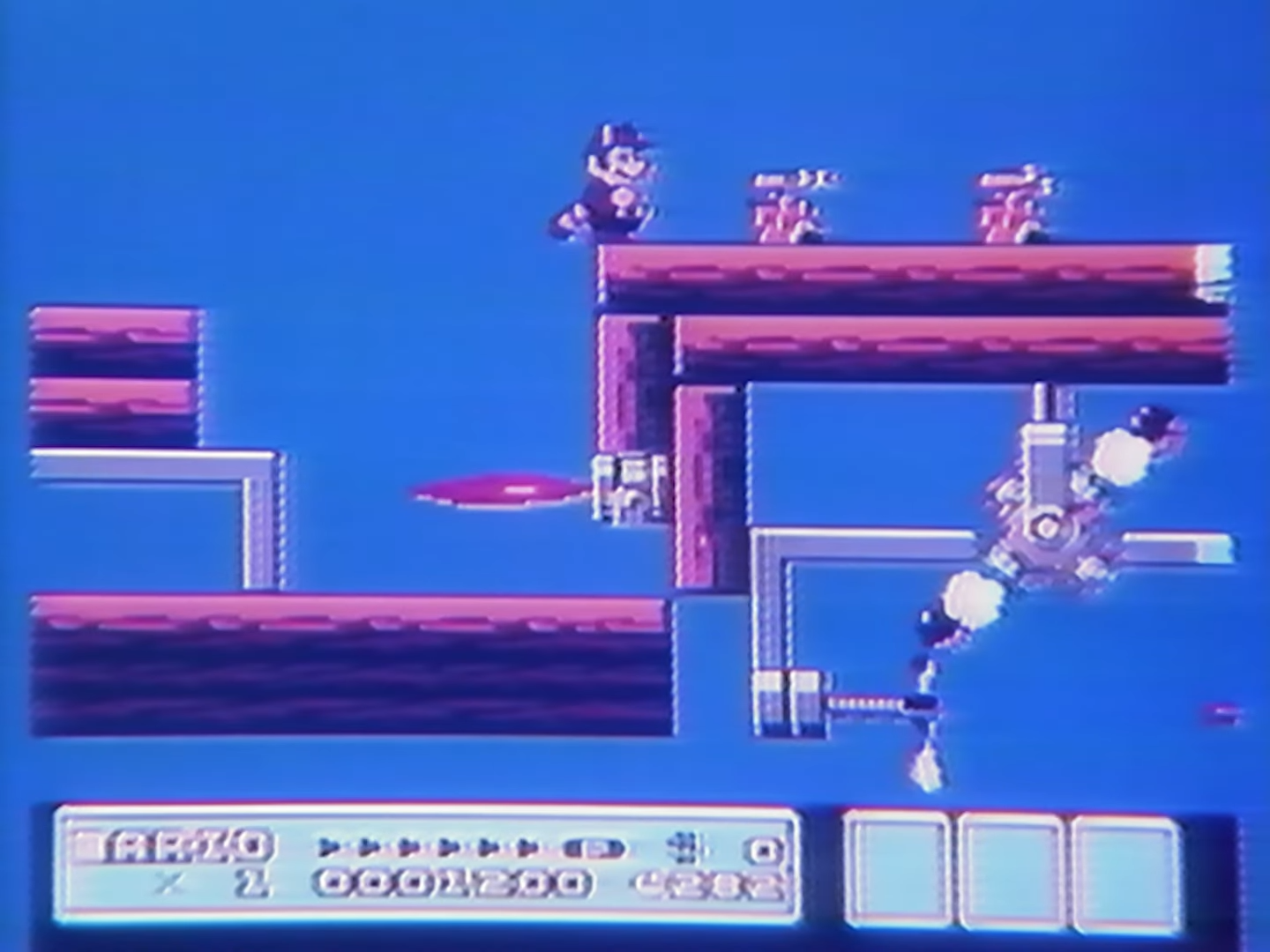 An Airship with a unique design. The questionable placement of the cross cannon causes cutoff on the crossbeam. 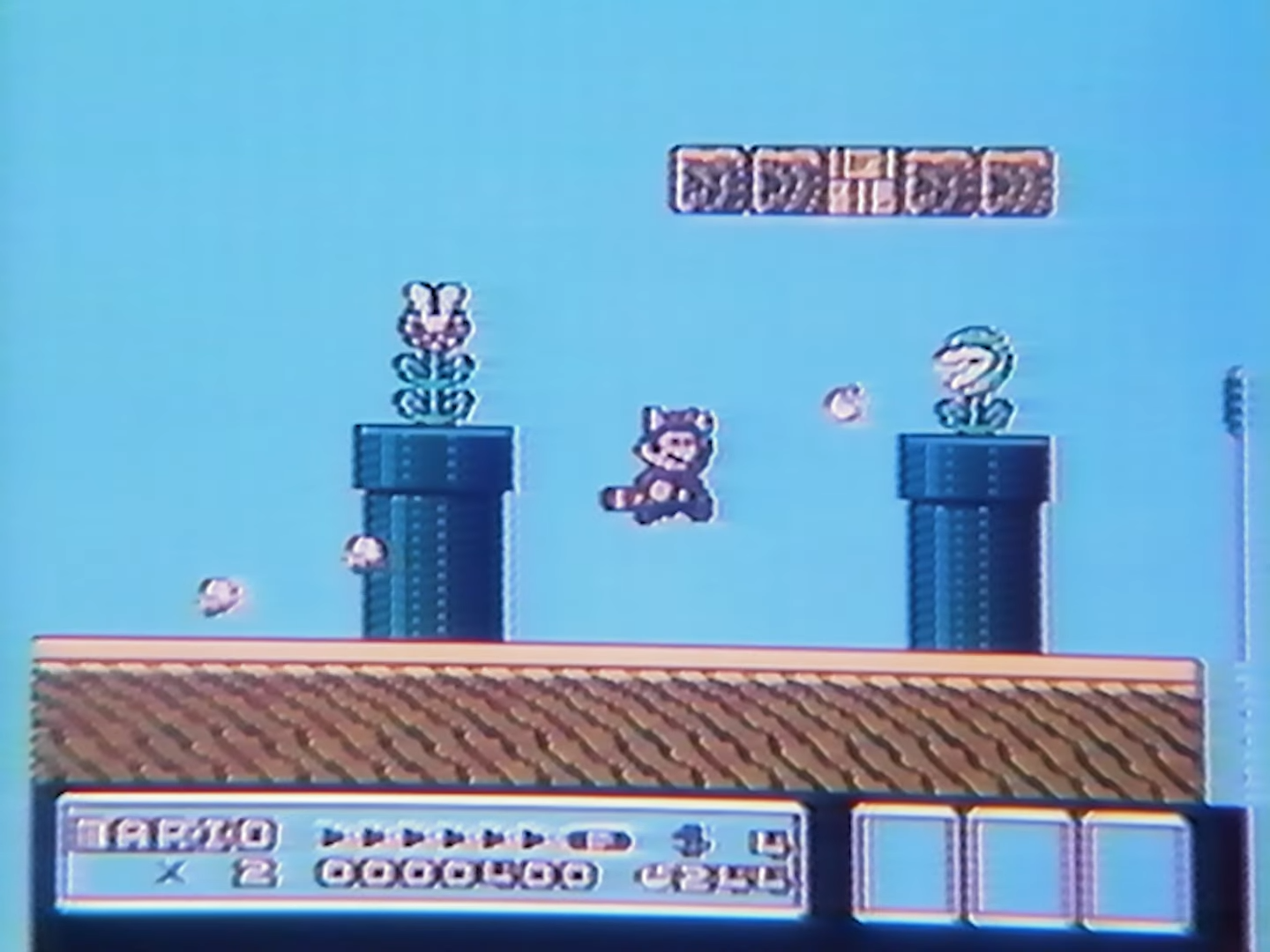 Possibly an actual gameplay screenshot, as the Venus Fire Trap has just shot a fireball while two others are on-screen (the aforementioned GTV preview footage shows that the enemy moved rather quickly earlier in development). The pipes here are slightly thinner than they are in the final game. 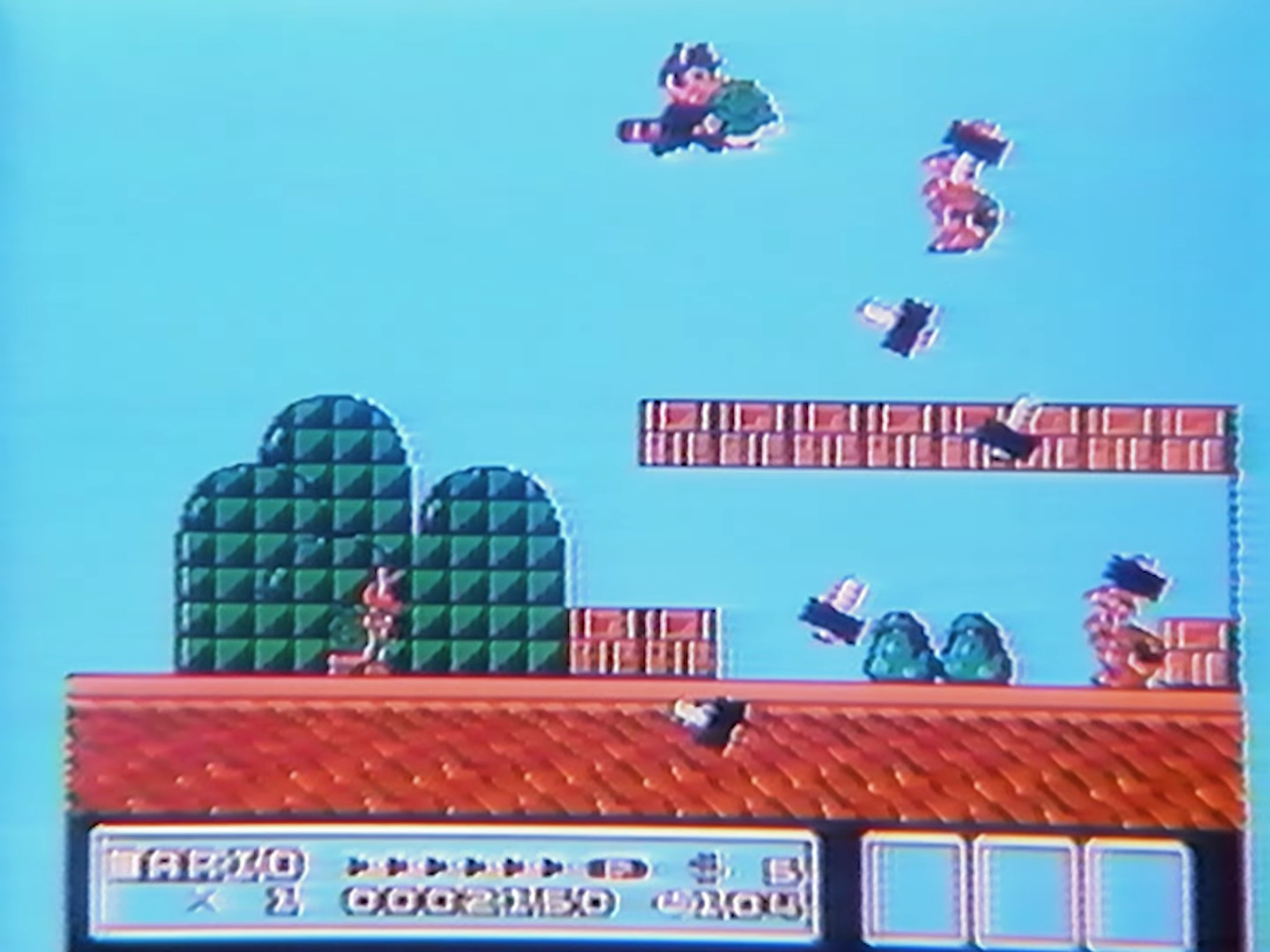 A level with bunkered-down Hammer Bros. Unfortunately, this interesting scenario is never seen in any real level.

An early battle with Morton Koopa, also with the TV-esque curving. Strangely, Morton is given a different palette. The battle arena design is the same as Iggy's, the only difference being the presence of windows. 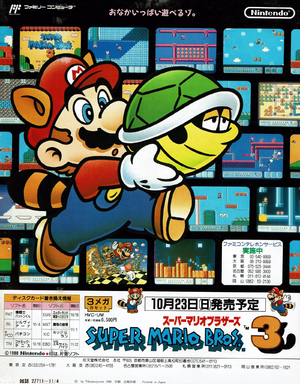 This Japanese ad for Super Mario Bros. 3 shows a large-scale artwork of Mario holding a shell, surrounded by screens of the game. All of these screens were taken from an earlier version of the game, evidenced by the prototype status bar (It displays "Mario" in all-caps on top of the lives counter whereas in the final it shows the World you are currently in) and many other differences: 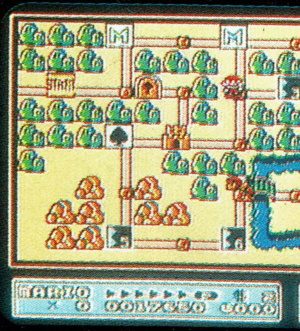 The map screen of World 1. There are several differences here in comparison to the final: The path that is initially blocked by a gate leads directly to the fortress; Level 3 is located where Level 4 normally is, while Level 4 is not seen in the picture (probably located on the right); the Spade Panel is located to the left of the fortress; and the south Toad House is missing. Notice the status bar is displaying 0 lives, which is not normally possible in the game. 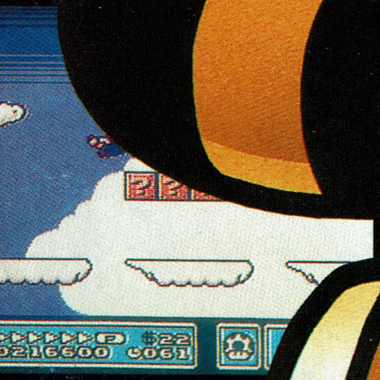 An unknown sky level. The sky is dark blue and has a gradient that fades into black on the top, a visual feature not seen anywhere else. 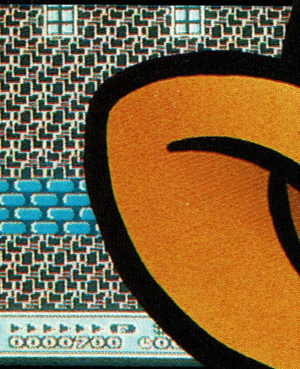 A castle level with an unique blue bricks pattern, very similar to the castle tileset from Super Mario Bros. 2. These tiles are still present in the final game. A pipe maze level, like some levels from World 7. Here you see two red Goombas side by side. Also notice that the pipes are slightly thinner in this version. 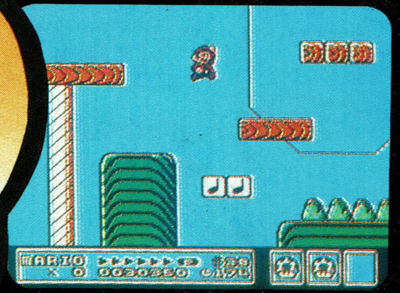 An athletic level, like World 1-6, but with an unfamiliar design. The wooden pillar is colored white whereas it is beige in the final. Once again, the status bar is marking 0 lives. 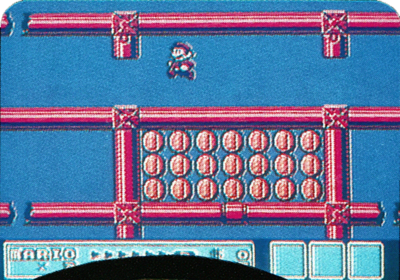 This looks a lot like World 7-9. The differences that set it apart from the final are very interesting: Besides the pipes being all colored pink like in 2-4 (they are light blue in the final), here you see these unused pipe-related blocks as they were intended to be used. The coins chamber is blocked by a breakable pipe connector. In the final, regular brick blocks take their place.

As seen in this video at the 1m 10s mark. While the game appears to be very close to the final (including the final versions of 1-1 and 1-3), there are a few scant differences present here, such as the cards in the card-matching game not having their N's.