Stinglashes appear to be absent in this version. In many cases, Whiplashes usually appear in their places in both Freezing Furnace and Bad Magic Bayou.

The title screen does not have the level from the introduction, as it is absent in this build. The logo also has some slight alterations.

The warning when the player is about to leave a section of a level while Banjo has been transformed has been changed. Rather than seeing Mumbo with an X next to him, a somewhat off-model Mumbo sprite appears at the top of the screen.

Only three haystacks are surrounding this Jinjo in the prototype. Also, they are spread out further and are a bit more away from the molehill.

The Jinjo Oracle in the overworld has been reshaded and made more three-dimensional, matching up with the other Jinjo Oracles.

The Jiggy Switch is a more basic-looking switch in this prototype.

The entrances were altered to make them seem a little less demonic.

Grunty's Lair has been re-rendered to remove the stony texture and close the mouth. The player enters through the mouth, not through a Jump Pad.

An ice block was added in the final version.

These two honeycombs were moved to the center, instead of being on the left side.

The developer's graffiti in Honey B.'s hive is absent in the prototype.

This gap was widened in the final version to prevent the player from taking a shortcut.

The entrance isn't pitch black on the inside, and the swamp is slightly bigger on the right.

The area near Fiery Furnace's entrance has Green Spookos, not Red Spookos.

The entrance to Fiery Furnace was removed from the final version. Also, the pathway was slightly changed.

Pipes were added near Freezing Furnace/Freezing Fjord's Entrance. The land was made a little bigger.

Once again with the changes to Bozzeye's grammar.

The level got its grass redrawn and the paths are darker.

The Whiplashes have a corrupt palette underwater.

The chicken near the top of the mountain, as well as the sliding minigame, are absent.

The Whiplashes protecting this Jiggy are more spread out in this build.

The player can swim in this body of water in the prototype, though they can't dive in there. Also, the loose apple is below the barrels.

The sheep-catching minigame is absent in this build. There is a Jiggy where the game would have been.

The second floor of this room has the first floor more visible than in the final version. This was changed likely to make it less confusing for younger players.

The skeleton head emblem is a sewer drain in this prototype. It was likely changed to make the minigame's place less confusing.

Whiplashes are green underwater, rather than their usual pink.

The trapped Breegulls were re-rendered in an isometric perspective for the final version. They also don't fly off the screen nor make any sound when freed. Instead, they celebrate their freedom and disappear.

Much of Grunty's Quarry is graphically incomplete and has glitchy collision detection. Also, note the screwed-up layering shown on the left screenshot. The player can't climb some of the ladders. 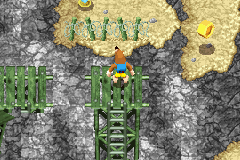 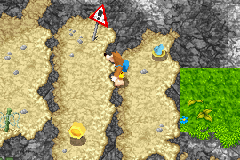 In addition, Grunty's Quarry has an additional area that isn't present in the final version.

An extra island with a Jinjo was added in the final version. 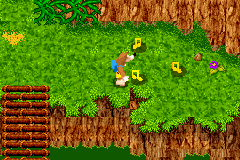 If the player is not careful, the game will end up crashing if the player moves a little bit beyond this point, making it difficult to grab the rightmost Note in this screenshot.

The entrance has been altered so that there is a piece of natural land and some slippery slopes.

The Gruntling instructor has a completely different sprite. Note that, although barely visible in the screenshot taken, the commander-like hat in the portrait does not match up with his in-game straw hat.

This toxic warning sign was moved up, for whatever reason.

This skull is right out in the open, near Mumbo Jumbo's skull, in this prototype.

The slope was replaced with a flat platform. The vines in the background were also changed so that they only cover up the Jiggy and Germuloids.

Some trees were removed and replaced by a cliff.

Random Note rearrangement around the entrance of the manor.

There's no indication as to how many eggs the player is supposed to shoot here. This is odd, because there are indicators everywhere else in the manor.

A room was added to the manor in the final version. Although it isn't pictured, it contains some Notes and a Honeycomb Hive.

This hallway is narrower in the final version. The boss room that comes after this is absent in the prototype. Instead, there is a Jiggy right out in the open. The final version, obviously, does have this room.

More of the staircase was made visible in the final version, probably because of how awkward it looked.

The floor seen on the left door is not visible in the prototype.

The bottom of the house outside is slightly different.

The sewer water is less detailed in the final version, but is just as deadly.

This extraneous wall was removed from the final version.

There are planks added here, likely to not confuse the player that there might be something in this section.

The two squiggly lines were replaced by a square. This change also applies to one of the portraits in this section.

This chimney is improperly layered, covering up two of the candles.

This sentence, said by the mother Squit, was clarified.

Commas were added and they added the correct form for "Jiggy's".

Ripvoski's dialogue has been respaced and slightly reworded.

Slightly different object placement. The oil spill shrank and was moved up.

The Red Feathers are gone in the final version.

In the final version, the N. Kredits arcade machine allows the player to play minigames. However, it does not in this build. The arcade machine is also different, graphically speaking: the monitor shows nothing, the direction pad is different, and the wooden texture isn't nearly as shiny.

The panels on these walls were removed, likely because the player couldn't see what type of egg they are supposed to be using.

This Jiggy is actually possible to get without transforming into an octopus.

The barrels that mark the level borders are missing in the prototype. Instead, there are a series of islets.

The switches inside the sandcastle maze have different sprites, likely changed due to not making much sense.

A palette error causes the Chompa in this room to be bugged out.

The beam of light was changed to a platform and a hole in the wall, making it easier to get out of the room.

This tower was redone and the teleporter that leads to a boss battle was removed.

The Jinjo Oracle was recolored from black to turquoise.

The entrance has red eyes, as opposed to purple eyes. The pipe at the beginning of the level is missing, as are the floating ice blocks in the water. The spiky icicles got a palette swap.

The Fire Egg panel was removed from this area.

This island was redrawn to make it seem more sane.

Because Freezing Furnace is separate from Fiery Furnace, the entrance between the two levels is absent. Instead, a Chompa takes its place in the prototype.

This area is elevated in the prototype.

The Red Feathers were replaced with Golden Feathers and an ice block was added.

The Flight Pad was removed and the x mark was replaced with an elevator.

The islands were made more slippery, making it more of a challenge for a quest than it is in the final.

The igloo that leads to one of Ripovski's fishing minigames is absent. Also, the trees were re-rendered.

Graphics for an unused UFO-like character which were removed in later builds. The palette here is a mockup as its palette doesn't seem to be in the ROM.

It also has a dialogue icon.

(Source: The IT (discovery), Mattrizzle (mockup palette))
Retrieved from "https://tcrf.net/index.php?title=Proto:Banjo-Kazooie:_Grunty%27s_Revenge/Early_Build_(Build_No._0.37.08)&oldid=1020110"
Categories:
Cleanup > To do
Subpages