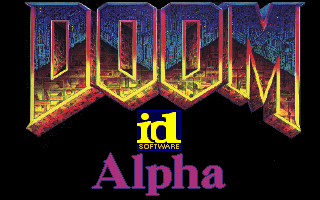 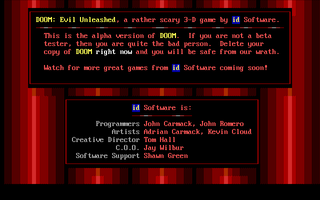 Compiled on April 2nd, 1993, there are many changes to the engine, though the game is still very different. It should be noted that there is no sound at all. 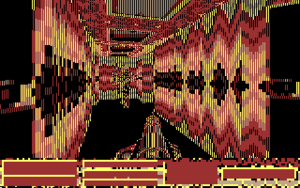 When you press the R key, you experience a totally gnarly acid trip.

The helmet HUD has been entirely removed, and an equally non-functional status bar with various empty fields is present. This does mean this build entirely lacks an automap.
This build no longer has the reduced view mode, or an alternative HUD.

Weapons cannot be picked up at this point of development.

The bayonet is visually identical to the previous prototype. It still replaces the fists as your only melee weapon.

The chainsaw's view sprites are here, though the view idle animation was updated in the final game to animate more, the attacking frame was animated, and the chain was made more clear.
The chainsaw also now has its final pickup sprite.

The rifle is also visually identical to the previous prototype and still replaces the pistol in this build.

The shotgun's view sprite remains visually identical to the previous build. The pickup sprite on the other hand, has completed half of its remodel towards becoming the final game's chunky shotgun, though the stock is still shaped similarly to the 0.3 pickup.

This pickup sprite seems to be where the shotgun design for the final game's title screen and episode 4's ending picture were drawn from.

The Machine Gun's view sprite has remained the same as in the previous build and it still takes the place of the chaingun.
The pickup sprite is the same silhouette from the 0.3 build, but now fully drawn.

The missile launcher is still not implemented, and the placeholder gradient silhouette remains until the next alpha.

The BFG is also still not implemented yet, and still has its placeholder pickup graphic.

The Dark Claw is still not implemented, but it has had its pickup sprite completely redrawn.

The stimpack is still a syringe, though the sprite has been modified and the syringe body now matches the handles and plunger.

The 'X' on the medkit has been colored red, otherwise it remains the same, and still very different from the final design.

The clip has been redrawn to a different and slightly distorted angle in this build.

The larger bullet pickup appears for the first time in this build, using 3 pistol clip sprites stacked on each other.

For some reason, the smaller shell pickup in this build uses an edited version of the ammo box sprite from Spear of Destiny, which makes no sense given it does not portray shells. The loose pile of shells was used for the larger pickup instead.

The large shell pickup is a temporary pile of shells. The final game would pack these neatly into a box.

The rocket pickup appears, has no top, and is less detailed overall. Both the small and large pickups use the same box sprite.

All cell pickups use an early version of the large cell pack graphic.

The Soul Sphere remains a jar for now, identical to the last build.

The jar-based powerups have been pruned from 10 to 5 in this build. They've also had their symbols redrawn in red.

The light amplification visor was redrawn as a single unit and given an animation frame in the final.

The various shield pickups had at this point been replaced with a singular animated shield generator.
This item was cut from the final game, and the sprite was later reused for the small cell pickup, without its animation.

The treasures have all been redrawn, with the dagger and candle being replaced with a soul jar and chest respectively.

Most of the Demon's sprites remain the same as in Doom 0.3.

Their back sprites have been flipped and redrawn.

And some of their side sprites have also been redrawn.

The Baron of Hell's graphics have still yet to be updated since 0.2.

The Lost Soul's sprites are identical to the last build, and they're still the only monster who has a full sprite set in the .WAD.

The Zombieman's first sprite appears in the files for 0.4, though it is an obvious placeholder drawn from the player sprite.

As the Imp's sprites were completed in the last build, they are identical to the final game here as well.

Barrels of various colors. Replaced by the singular explosive barrel in the final game.

This tech pillar was shortened in the final game.

Unused floor lamps, including breaking frames for one of them.

A storage canister that is mentioned in the Doom Bible, with incomplete shading and a temporary breaking animation. Removed in the final game.

A zapper thing that would be mounted on the ceiling.

An unused hologram of the moon of Tei Tenga.

Unused wires dangling from the ceiling.

These sprites were cut out from some of the tech wall textures. It's likely they were used as decorations.

DOOR2_1 is completely different in the alpha version; even the UAC logo was changed.

DOOR2_3 had its gradient cleaned up a bit.

DOOR2_4 was re-drawn a little bit, and extended vertically.

WLA128_1 was changed completely from a perforated gradient to a more generic tiled wall piece.

The gradient was altered here to seem a bit less jagged.

This bezel has slightly more subtle shading in the final.

Several of these walls will have tiny little alterations, mostly to remove green and white spots.

The wall is slightly wider in the alpha, but is identical to the final version, otherwise.

The cabinets from the last alpha have been completed here, though this is the last build that has these textures.

WALLBC_2 has been removed and repurposed as part of PLAT1_1, which would be further modified into the final game's PLAT2_1. 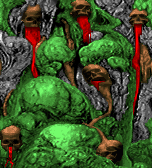 W20_1 is another wall exclusive to this build, and a trippy one at that.

These walls appear in future prototypes starting here, but not in the final game.

FLAT22 is quite different, with an uglier gradient and less embellished border.

TLITE6_5 and TLITE6_6 both had their lights redrawn into a smoother gradient.

FLOOR5_8 has had its brown square reduced in size.

The rest of the FLOOR5 set has been replaced entirely, with the exception of FLOOR5_7.

The consoles are complete as of this build, with a new gradient, more generic screen, and less colorful lights.

The rest of the flats for the console set have also been completed in a similar manner, though these would be excluded from the final game.

The green NUKAGE flats are the same as in the last build.

The BLOOD flats are still named NUKAGE, and are just a recolor of the green NUKAGE flats.

There is also a set of brown SEWAGE flats, reminiscent of the SLIME flats from Doom 2.

FLAT20 has been updated, giving the cards far more detail and spreading them around the texture. Still bearing no resemblance to the simple pattern this slot was later used for.

CONVNA and CONVSA are a set of animated flats that appear exclusively in this build (they're in 0.5 by name, but the flat is dummied out).

The rest of these flats begin to appear in later builds starting here, but not in the final game.

Levels 12 and 13 are mentioned in the readme file, but they are completely absent, here. Also, by default, you can only access the first nine levels. In order to access levels 10 and 11, you need to type DOOM E1Mx, with 'x' being any number between 1 and 11.

There are a couple of marines sitting around a desk, playing some cards. It's an early version of "Spawning Vats".

An early version of E2M2.

Became E2M3; has some temporary textures.

Became E1M6; it is largely identical to the final version, but there is some octagon structure that mostly got cut out.

This eventually became E1M4; however, this version has showers with demons hiding in them.

This level did not make it into the final game.