This is a sub-page of Proto:Hot Wheels World Race (PlayStation 2, GameCube, Windows). 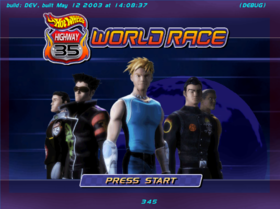 An early prototype of Hot Wheels World Race was dumped on May 3, 2021 by Ziimbiian. The prototype itself is very buggy and unstable, but it has a lot of interesting things hidden in the files that cannot be seen because whenever you select a track, the prototype crashes. This prototype can only be used with Microsoft’s .NET Framework or DevStudio VC6, according to the README.txt file. Most of these files are leftover from the currently lost March 31, 2003 prototype for the PlayStation 2. Despite being a PC build, it has PlayStation 2 buttons for some reason.

The graphic when you finish the race. Originally it was red and had no color gradients for the font Niamey. In the final game, the Finish graphic is a XML file with the flame gradient of the font Niamey.

Countdown for the races. Had a more “factory” look for the numbers.

The results screen for races. Notice there are only 15 cars in this version instead of the final game's 35, with these 15 cars being the same ones seen in the Game Boy Advance version of the game. An early Highway 35 logo from previous builds is also included in the file. In the final game, the results screen is an XML file.

The main menu screen for League Mode. There’s an unused graphic for a volume slider.

An early render of the Seared Tuner vehicle that looks similar to the render in the Game Boy Advance version of the game.

An early version of the Dune Ratz team logo. This graphic can be seen in the final game on both Egyptian Dunes tracks, but it is a separate bog file.

An image of an early version of Submerged City 1 (Deep Zone). 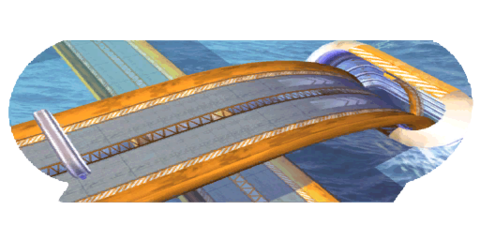 There are multiple instances of this message in the executables. Notice that “goddamn” is misspelled here.

There's a second variant, with an exclamation mark this time.

A message about a directory already loaded in the system.

A message about a Climax employee. Here in this message he is nicknamed TempleMan, and according to another Climax employee, his coding skills were rubbish.

The purpose of this message is unknown.

The purpose of this message is unknown.

A message about a Climax employee messing up one of the key elements of the game.

Retrieved from "https://tcrf.net/index.php?title=Proto:Hot_Wheels_World_Race_(PlayStation_2,_GameCube,_Windows)/May_12,_2003_Developer_Debug_Prototype&oldid=1121520"
Categories:
Cleanup > To do
Cleanup > Works In Progress
Subpages