From The Cutting Room Floor
< Proto:Minesweeper (Windows, 1990)
Jump to navigation Jump to search

In July 2010, Damien Moore discovered a prototype of Minesweeper in a collection of files uploaded to defunct BBSes. This build appears to be from late in development (as it is v2.9 while the final is v3.0), but there are some noticeable differences.

The game's icon was changed from a lit bomb to a mine.

All prototypes from Mine 2.6 to 2.9 have an interesting feature, pressing the escape key will minimize the game with this barcode icon and the text "Not a Game".

The lit bombs were changed to mines, and the unlit bomb was changed to a flag.

Mine 2.9 has a sound option and a preferences menu, both removed in the final. It also lacks the final's "Custom...", "Color", and "Best Times..." menu items. 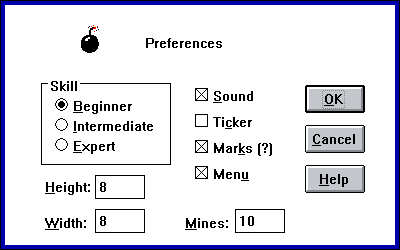 Mine 2.9 has a preferences menu that was removed in the final. It allows you to toggle most of the settings available in the "Game" menu, along with a few others.

All of the menu items were renamed in the final, and "Keyboard" was replaced with "Search for Help On...".

The early "About" dialog is very different – the only signs of official Microsoft involvement are in the names (Microsoft used the firstname-lastinitial format for their email addresses at the time, and probably to this day, and at the time people were generally referenced internally by that format too). Duff Software was a name used by Microsoft developers for unofficial projects, usually games, as explained here.

It also credits a "Larry H." (Larry Houch), who goes uncredited in the final. According to Mine 2.8's help file, he was the game's visual consultant.