This is a sub-page of Proto:Plants vs. Zombies (Windows, Mac OS X). 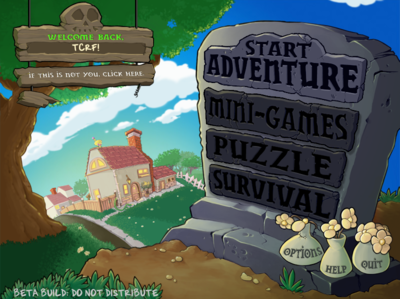 Dated December 2nd, 2008, just 5 months before release, this build still retains the earlier title of Bloom & Doom. The game will not function as-is, as upon starting the game it attempts to contact a PopCap beta testing server, which is no longer open to the public. A patched executable is needed to run the build.

Although this prototype is relatively close to the final (only dating 2 months before the 0.9.9 prototype and possibly the 1.0 build of the game) and can even be fully completed without modifications, albeit without an ending, it seems to be from a time when PopCap were still in the process of polishing everything up and, most importantly, stripping out unused content, making this prototype a goldmine in terms of discoveries. 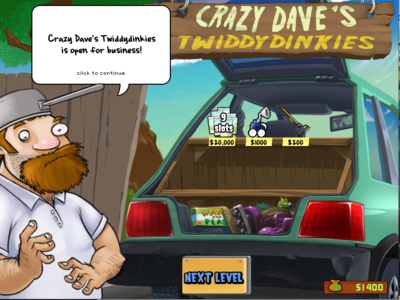 The dirt near the helmet doesn't exist in the final game.

The animation for getting a reward is different from the final version. In the Bloom & Doom build, a bright, golden glow is displayed behind the reward.

The spike impact effect only exists in this build.

Jack In The Box Zombie Idle

The animations for the Flag Zombie walking is more jankier than in the final. Additionally, when damaged, the flag uses a different texture, which can be found unused in the final game's files.

Dr. Zomboss doesn't wave a flag in the prototype.

The Zombie doesn't blink before its body turns into ashes in this build.

Sprites for the hammer was added in the final version.

"The Zombies ate Your Brains" Text

Text is less detailed and is missing the splat on the exclamation point.

Originally, the game was going to use streamed music in .mp3 format. This prototype seems to be from when they were just making the switch to tracker sequences (a change likely made to allow for dynamic music), as Grasswalk and Moongrains are sequenced while the rest of the tracks are still using .mp3 files. The code for playing streamed music during levels still exists in the final build, including post-1.0 versions. Interestingly, the streamed tracks are exactly the same as the ones included in the OST.

The arrangement here is very different from both the OST version and the sequenced version in the final game. It includes a bassline not present at all in the final modules, and some backing melodies are lacking harmony, and play at incorrect volumes. Some samples are also different.

The arrangement here is very different from both the OST version and the sequenced version in the final game. Some samples are different, and some backing melodies are lacking harmony, and play at incorrect volumes. Some instruments also play at a different octave.

Uses the Plants vs. Zombies Original Soundtrack version of Grasswalk as a placeholder.

Uses the Plants vs. Zombies Original Soundtrack version of Moongrains as a placeholder.

Uses the Plants vs. Zombies Original Soundtrack version of Grasswalk as a placeholder.

A unused song possibly originally intended for the intro cutscene or title screen. Might be a placeholder.

The words 'BETA BUILD: DO NOT DISTRIBUTE' can be seen at the bottom left corner of the main menu screen.

A completely different logo is used, using the earlier name 'Bloom & Doom.' Additionally, the artwork is slightly cut off at the bottom unlike the final game, most likely to make room for the taller logo.

This shows a notification instead of a note from the Zombies.

The Limbo page still exists in this version. You may access it with Tod Mode.

A very early credits "roll" (although barely one, as it seems to only contain 3 credits that never move, likely as a placeholder) can be accessed from the options menu like the final game, however oddly will not appear after beating the game, as that instead shows a placeholder ending screen similar to the level complete screen. This one appears to be the one that would eventually become the Zombies on your Lawn music video from the final game however, featuring zombies doing various animations and stunts over the lawn background with the Grasswalk music. This quickly ends though, leaving the player with a static screen.

It can also be accessed from the options menu regardless of whether the player has already beaten the game or not - in the final game, the button does not appear until after the game has been beaten atleast once.

All the unused Zombies appear in this build before they were removed, in all of them they have a cruder design, wear a greyer jacket, have no undershirt, and missing their signature tie. References to these cut zombies can still be found in the files of the game and can be spawned.

The Zombie walks a dog, like the name intends and has the same health of a Zombie (10 hitpoints).

The dog has 14 hitpoints. When the walker dies, the dog charges much faster. The dog is a low-level target so it can't be hit by most plants in the game, even the Spikeweed/Spikerock, what's interesting is that the dog appears in one of the concept arts of the game having a black collar instead of yellow and a more refined style.

The Zombie is somewhat copied from the Balloon Zombie however the propeller when airborne takes three hits while maintaining the original health of it. It is also magnetic, making it grabbable by the Magnet Shroom. It has no falling death animation.

Interestingly enough, there's also an early version of the Balloon Zombie. Although it does have 'animation' frames located in it's files, they are all duplicates of the same sprite. It's located near the files of the Propeller Zombie, suggesting that this was it's replacement.

Not to be confused with the other plant of the same name from the game's sequel, this plant works similarly to the Cabbage-pult, and was possibly an upgrade to it at some point in development. The plant launches frozen cabbage towards the closest zombie, and slows it down. There's a second animation in the image files that has a catapult plant, without a head and with a green basket that is part of the leaves, launching a projectile. It's unknown if this is an older version of the Ice Lettuce, but it seems likely due to them being stored in the same file.

This plant fires spikes towards flying zombies. Can be placed atop other plants. It also points up when a Bungee Zombie targets it. According to a developer, this was an early version of Cactus.

Early files for the projectiles and it's seed packet description suggest this plant would've fired bees instead of spikes.

Instant-use plant. When planted, this plant will stop time temporarily for a maximum of 3 seconds and while frozen will rapidly reload every seed packet on the inventory.

Oddly enough, this plant reuses the same image file as the Duplicator for it's appearance.

When planted, this plant spawns a seed packet on top on it that switches constantly. These seeds can be planted.

This plant acts identical to a Cherry Bomb, but hovers in the air and can be placed atop other plants. Oddly enough, the graphics used are earlier versions of the Cherry Bomb, and not the final graphics. The tooltip for this plant misspelt "bomb" as "omb".

Despite (most of) these plants having their own seed packet graphics, they're no longer used in the game.

Localization changed for the Cabbage-Pult, Kernel-Pult and Melon-Pult, each having their damage was increased and a firing speed of 1/2x. Despite the text changes, they all have the exact same stats as the final game, suggesting these changes might have happened in an earlier build and the developers forgot to change the localization before this one.

Oddly, when a dialog box is displayed in the shop, all game logic is paused. Moving the box or clicking on a button resumes game logic. This does not happen with any other dialog boxes, nor does it happen at all in the final game.