From The Cutting Room Floor
< Proto:Ratchet & Clank: Up Your Arsenal‎ | May 26, 2004 build
Jump to navigation Jump to search 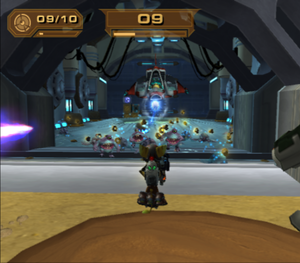 This enemy takes 3 hits of the Nitro Launcher in the prototype, compared to the final version where he takes 1 hit.

The crates you can take cover behind on Planet Veldin are different from those in the final game.

They used the stronger crates from the first game as placeholder for the crates they use for cover in the final game. The rocks on the ground also seem to be placed differently.

The dropship has the Q-Force logo on it compared to the final version where this is not present at all. 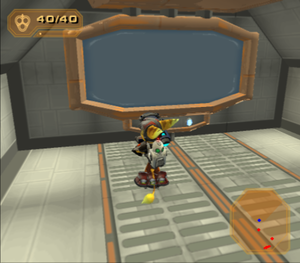 It is possible to walk a bit inside the dropship before you get forced into the battlefield sequence.

The Veldin freefall sequence is missing missiles in the final version and the fog is also significantly more dense in the prototype version with it being present throughout the entire sequence.

The end of Veldin is missing the structures that you can hide and strafe behind.

In the prototype, Veldin shares the music of the Phoenix Rescue section in the final game as a placeholder. The track used here is also present on Tyhrranosis. However, the final version has 3 dedicated tracks for the 3 different segments of the planet: Start, Freefall and Battlefield.

This room was originally supposed to hold the Turbosliders as a Garage. In the prototype, a Refractor gadget is placed there as a placeholder since the race wasn't properly implemented yet at this point in development. Since the race was cut, the Refractor was moved to Marcadia and this room was filled with a bunch of crates and a multiplier crate.

There are more breakables like those below in the retail version while there are none to be seen in the prototype.

Some very obvious differences in lighting with the prototype version being a lot more blue-tinted while retail is a lot more orange-red tinted. This was probably changed to reflect how the rest of Florana looks considering how different it is in comparison.

This comparison shows some differences in platforms. The prototype is all falling platforms that you need to jump across with nothing else added to it, while the final has a platform that doesn't fall, a fire trap and falling platforms.

The vendor before the boss fight is not present in the prototype.

There is no ship customization available and the surroundings around the ship are a lot more empty in the prototype as it is just flying there while the retail version has more going on.

This dropship also features the Q-Force logo as seen on Veldin in the prototype.

There is a claw holding the dropship. This was most likely supposed to move it to the empty room right below it.

The armor vendor has green mega-corp text and seems to be just using the regular vendor as the model. The vendor menu seems to hold a lot of similarities to the one from Ratchet & Clank: Going Commando.

This room features no trophies and the teleporter to Insomniac Museum is absent.

The VR simulation area looks very different and unfinished in the prototype.

An example of VR Arena. The lighting is very different, texture choice is slightly different and the walls spin a lot while in the final the walls are completely static.

The VR Training area has a lot of things to cover.

An example of opening the Vendor while having the VR Arena menu open. 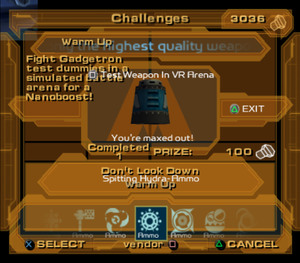 Opening the vendor in the VR menu.

The Vid-Comic game system is the Insomniac Pyramid from Ratchet & Clank: Going Commando in the prototype, while they replaced it with a different model in the retail version of the game. The floor also has a different color with it being more blue-ish.

The area where you usually recieve information and generally encounter a lot of cutscenes has some differences. Like the railing not being present at all, floor having a more blue color. And being able to see VR Arena & training from the window. 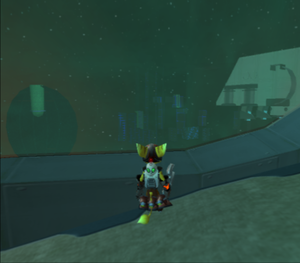 It's possible to see the VR arena and VR training course from here.
Retrieved from "https://tcrf.net/index.php?title=Proto:Ratchet_%26_Clank:_Up_Your_Arsenal/May_26,_2004_build/Differences_by_level&oldid=750733"
Categories:
Cleanup > Works In Progress
Subpages