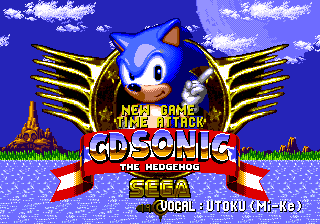 v0.02 is the earliest known prototype of Sonic CD for the Sega CD. The build is dated December 4th, 1992 (nine months and two days before final), predating the previously discovered 510 prototype, and was created for exhibition at the "Yuusei Sega World" event in Japan that year. It was dumped by drx on October 26th, 2019 as part of Hidden Palace's "Sonic Month."

Much of the game had yet to be implemented, or is buggy at best. In terms of gameplay, only Acts 1 and 2 of Palmtree Panic are present in the build (though Collision Chaos and Quartz Quadrant do have leftover stage data). This is also the only known prototype that acknowledges the infamous "R2", which is present in the Time Attack screen, and is selectable by using a hex editor but is not functional.

At this stage, the game calls itself CD Sonic the Hedgehog in English; an odd touch considering that the Japanese spelling does put the "CD" at the end of the name. An extra SEGA logo screen is present at the start, complete with classic "Se-ga!" jingle. It was removed after the 512 prototype.

The title screen has several early elements that would be changed from v0.51 onward:

Palmtree Panic was originally called Salad Plain, according to the Time Attack screen (see next section below). 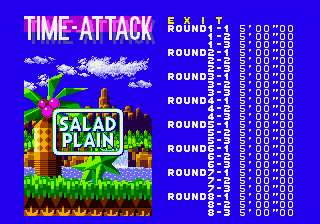 The choice for the Past themes later using sequenced PCM audio is for space-related reasons; the CDDA version of the songs "just wouldn't fit" compared to the PCM ones.

When accounting for four CD audio variations instead of three (for reference, a average Sonic CD track is 1-2 minutes, or 10-20 megabytes), the data and music stored on the Sonic CD disc amounts to 600 - 700 megabytes which is dangerously close to a audio CD's storage capacity limit (around 650 - 700MB).

The "I'm outta here!" trick (where Sonic jumps off the level after three minutes of no controller input) doesn't work the same as it does in the final version of the game: the camera tracks Sonic as he falls, and he dies when he reaches the bottom of the level instead of just disappearing and triggering a Game Over. Plus, after respawning, Sonic retains any rings previously collected.

Time traveling doesn't seem to work correctly, as using the spinners will instead cause the current level to restart rather than letting Sonic warp through time (the time warp appears short here because the black screens were trimmed out of the GIF).

Sonic the Hedgehog's programming was used as the basis for Sonic CD, but at this point the physics weren't fully optimized for this game, resulting in several oddities:

This appears to be an unfinished tilting platform object. Its graphics get loaded at certain points in the stage, usually around the small logs. It was scrapped by the time of the 510 prototype.

This is likely a preliminary swinging platform object for Tidal Tempest. Interestingly, if spawned with the subtype "00" in the game, it underflows and tries to spawn 255 sections of the "chain," causing immense load times and lag.

This object does exist in later prototypes and in the final game. It seems it was meant to be an object that would overwrite tiles, likely trying to create a "flowing waterfall" effect. It seems it didn't get very far in development.

Easily the most interesting unused object in this prototype. It appears to change level layout when Sonic touches it. Nothing like this exists in later prototypes or in the final game.

Collison Chaos Zone 2 (or R3-2) has leftover data in the ROM if you manage to bypass the restrictions in the Time Attack menu and select R3-2. The level is a copy of Salad Plain Zone 2's Past, plays Present's music, and has the Present version's object layout. What's special about this level is that on the wooden bridges seen in the video, there are objects that knock you back that are very reminiscent to Collison Chaos' glass bumpers seen in Zone 2.

Quartz Quadrant Zone 1 (R5-1) also appears to have some leftover data, should the player manage to bypass the restrictions in the Time Attack menu and select R5-1. This level is a copy of Salad Plain Zone 1's Past, but with Present's music and object layout. Other than that, there is nothing especially peculiar about the level, and the level does not appear to have any objects left over from Quartz Quadrant.

Retrieved from "https://tcrf.net/index.php?title=Proto:Sonic_the_Hedgehog_CD_(Sega_CD)/Ver0.02&oldid=1143470"
Categories:
Cleanup > To do
Subpages