This is a sub-page of Proto:SpongeBob SquarePants: SuperSponge (Game Boy Advance).

Being the earliest incarnation of SuperSponge in game form (if you don't count the first commit to the Playstation port from August 29, 2000 found here), the prototype dated November 28, 2000 is a sight to behold. Not only does it happen to be the only one that dates from that year, but it turns out to be quite a visual treat as well, even compared to some later prototypes. 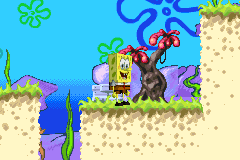