In general, v0.08 can be considered an expansion of v0.07, as they share many structural similarities.

v0.08 is the first version to introduce Number World, relegating the classic version of Lamp World to a simplified sub-area.

Due to a potential oversight, the FC Pyramids are inaccessible in v0.08 due to some tiles on the shore of FC World B blocking access to them. If entered through illegitimate means, it is fully functional. v0.09 would allow proper access to this area by adjusting the path to it.

This unused map also exists in the two following versions, but has a somewhat different appearance in v0.08. Most notably, the hand motif is absent. 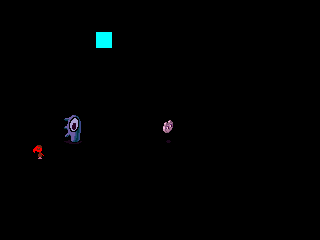 It's similar to v0.07's debug room with a few new features.

Four teleportation tiles are present on the upper left side, around the cyan tile. From left to right, their destinations are as follows:

These teleportation tiles would be carried over to v0.09.

Internally named Test Map 2. It's identical to previous versions, but makes its final appearance here. v0.09 would delete this map, leaving only its tileset.

Monoe now uses the final version of her picture.

The flabby-looking sprites have been added, and are used in the shack in the Barracks Settlement that the Squish-Squish effect was formerly obtained from. The rest of the Squish-Squish's sprites can only be seen in the debug map now.

In Lamp World, the eye tile that can be stepped on after getting caught by a Toriningen uses a different sprite than v0.10.

The Seahorse found in the Barracks Settlement has a more simplistic appearance, and was originally purple.

The Aztec walls found in the FC Ruins are colored differently.