The second game in the Puyo Puyo series. Its addition of the rather simple offset rule pretty much changed the way we play the game, and is still affecting us today... 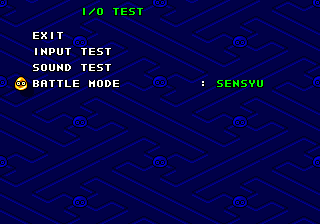 On the main menu, move to the Options item (farthest right) and hold C on Controller 2 until the Options screen shows up. An extra "BATTLE MODE" option will appear in the I/O Test menu, which can be set to either Sensyu or Point. 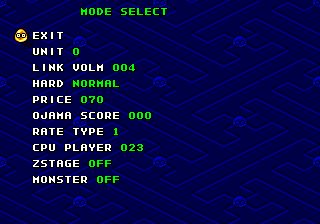 There is an additional screen of options ("MODE SELECT"), however the game does not provide a way to enter it. You can, however, force yourself in by accessing the option after the last option in the list, and you can have the game let you scroll to that invisible option with code 2833:01. The yellow puyo cursor will move to the right of I/O Test when that option is selected.

Some of the options appear to no longer do anything or are reset when leaving the options screen.

According to the routine that handles color bonus scoring, a sixth color is coded in the game, not unlike what the original had, but is not picked by the randomizer due to a hard cap. It appears as a green Puyo, but will not connect to a normal green Puyo.