A solid shooter with a rather unfortunate title, where you play as the members of the titular attack team.

All three versions of this game contain incomplete set of graphics for the Level 3 boss backgrounds, but with different beams and damaged nozzles graphics. This extra set has no rocket launcher block graphics at all. 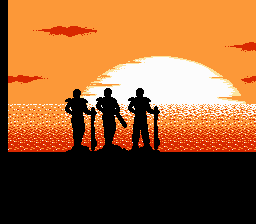 There were more different silhouettes for the first player ending scene in the JP version of this game. In addition to optimized CHR data for the first and the second player's silhouettes, a game graphics bank contains three more rather unused combined player silhouettes. On the picture above, two unused silhouettes are standing to the right of the original final version for the player one silhouette. The US and EU versions have completely different ending graphics.

The introduction is completely different between the Japanese release and the US/EU release. While it is largely the same in the US and European releases, the text was still slightly changed. The names of the playable characters and the villain were changed, along with their birthplace and affiliation. Mentions of 'S.C.A.T' were also edited out from the text. Additionally, the US version ends the intro on the word 'S.C.A.T' scrolling past the screen, while the European version shows a brief gray screen in its place. Oddly, the European version also seems to use a slightly modified font, with a different lower-case 'S'.

All versions of the game have button codes for starting on certain stages with a certain command for each individual stage. Here is the list of codes, should be entered on controller 1:

There are some difference between activation codes.

Exclusively to EU version, the activation code is completely different. To enable cheats, you must enter the button sequence A, B, Right, Left, A, B, Up, Down, Select on controller 1 (not 2!). In this version however, the extra lives code is the same as ending code in the JP version (Up + Start on controller 1).