Play as a giant, floating samurai head sent to defend the United States against the alien Darc Seed, who crashed to Earth in a meteorite and is turning the American people into zombies. Hola, Japan! 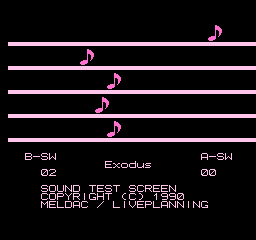 For the US version, press and hold Up + A + B at the copyright screen and wait until the next screen appears. Since the Japanese version lacks a copyright screen, you must hold the buttons as you power on the console.

The sound test has two "channels", both of which can be set to play any music track or sound effect. Select a channel with Left or Right, change the value with Up or Down, and press A or B to play the corresponding channel (select track 00, "Hevi & Nak", to silence the channel). Note that you can technically play two music tracks at the same time, though it doesn't quite work as you might expect: channel B always has priority over channel A, except for percussion and DPCM samples. 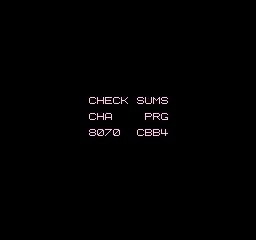 Hold Up + Left + A + B on second controller and press Reset. 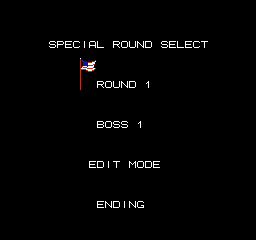 Power on the console then press Reset 25 times, at the title screen now press Up, Up, Down, Down, Left, Right, Left, Right, Start. "Special Round Select" menu will appear. Here you can select any stage to start with, any boss fight, jump straight to the ending or the Map Test mode in the "EDIT MODE" option. 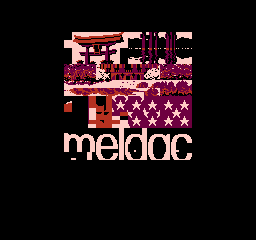 In the Special Round Select mode, put the cursor on the "EDIT MODE" option, hold A + B then press Start. A CHR Test will appear instead of the Map Test mode.

The game's initialization code checks for the presence of the string "Prg.K_Hiramatsu" in RAM to differentiate between soft and hard resets. Kunihito Hiramatsu is listed as the game's programmer in the credits.

In the Japanese version, the player character is a tengu mask, so there is lack of a "head of the samurai" joke. The storyline is also different, and some other graphics (such as the Statue of Liberty boss) are different.