This is a sub-page of SpongeBob SquarePants: Battle for Bikini Bottom (GameCube, PlayStation 2, Xbox).

This game has a few levels that go completely unused, but only one of them functions without modifying the area itself first.

An odd, unfinished ice cream-themed level with no skybox, leading to everything being screen artifacts in the background. It was originally intended to be a dream level for Patrick, much like Sandy's, Squidward's, and Mr. Krabs', but it was scrapped in favor of Here You Go, which the game internally refers to as Patrick's Mind. There are many aspects from early in the game's development, including the 'lovey-dovey' and thunder tikis as well as some early textboxes. The level is present in the GameCube and Xbox versions of the game, but it was removed from the PlayStation 2 version. This build of the level is dated July 23, 2003, while the version of the level that ended up being used is dated September 17, 2003.

As for the level itself, the player can walk around sundae platforms while dodging cherries, onions, and pickles that fall from the sky. They can switch between Patrick and SpongeBob, although Sandy's player character files are also present. Mrs. Puff is present at the beginning of the level, and although there are text files for her, she cannot interact with the player. On the second sundae platform, there's a long diagonal line of various NPCs and robots, all of whom are immobile but react to being attacked. There is a functioning golden spatula in the level, and collecting it will work like any other golden spatula does when collected: saving the game to the memory card. For whatever reason, it's referred to internally as BUBBLE_WAND. Strangely, there is a trigger that sends the player to the final Patrick's dream level. This might suggest that the two levels were meant to co-exist and connect to each other at some point in development, but ultimately only the latter level was kept in the game.

Although the robots in the level are normally inactive, there is a way to make them attack you; if Patrick belly-slams next to them, they will function normally once they wake up from being stunned. When activated, the Chuck robot goes to the center of the level and fires missiles at the player. This movement is unintentional; the Chuck robot has no defined movement points, and so his coordinates default to 0, 0, 0. He also behaves slightly differently, such as waiting less between throws and his aim being more direct than usual. All of this suggests that the robots in this level follow an earlier version of the final game's code. If one activates Chuck on actual hardware, the game will freeze when his torpedo hits something.

The concept for this level was later repurposed in Rehydrated as one of the zones in the game's multiplayer mode. Interestingly, this level is still found in the files of that game, only now it is completely textureless and empty.

The following codes for these regions will replace the "Here You Go" level with this one: 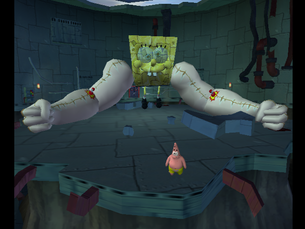 The B3 folder has an unused phase of the SpongeBot SteelPants boss where he has inflatable anchor arms, inspired by the MuscleBob BuffPants episode from the show. The level crashes unless the collision for the boss' anchor arms is removed (DUMMY_ARMCOLL_LEFT and DUMMY_ARMCOLL_RIGHT), for currently unknown reasons.

Like the Patrick's Dream level, this level can be found in the files for the GameCube and Xbox versions, but not the PlayStation 2 version. The build of this level is dated August 7, 2003, while the first phase used in the final game is dated September 16, 2003.

In this unused phase, Robo-SpongeBob has two attacks, both of which do no damage; a slam attack where he throws both his anchor arms to the ground, and a jumping attack that sends out a shockwave. During the slam attack, Patrick can pick up nearby debris and throw it on the pins in Robo-SpongeBob's arms, causing them to deflate. However, the boss is unbeatable, as you cannot damage the boss any farther after popping the Anchor Arms. As noted previously, the player fights Robo-SpongeBob as Patrick, although SpongeBob's player character files are also in the level.

The level has unused models for dumbbells and weights that can't be seen in the level itself. Interestingly, there are no files for a hit point bar. SpongeBob's friends are in the level as NPCs, including Mr. Krabs even though he was never shown in any of the cutscenes for the used phase. Much like the unused Patrick's Dream level, various NPCs like Robo-Plankton, several citizens, and robots are also in the level's files but have no spawn points.

This unused phase was probably going to occur between the two phases seen in the game (Kah-Rah-Tae and The Small Shall Rule...Or Not), given that Robo-SpongeBob receives anchor arms in the cutscene in-between those phases. It also appears that Patrick was going to be the character who was going to fight Robo-SpongeBob instead of SpongeBob, due to Patrick having the ability to throw objects.

The level was also featured in the Mario Kart: Double Dash bonus disc for a brief second in a trailer, with SpongeBob as the playable character. It is unknown if this means he was going to be playable or if he was just chosen for the trailer. (0:19 Seconds in)

This unused phase can also be found in the files of the game's remake, but just like Patrick's Dream, it is completely untextured and there is nothing you can actually fight against. 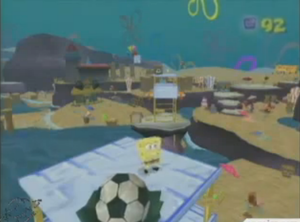 A pre-release screenshot showing the early level in its prime.

In the GameCube version, the Goo Lagoon folder has two folders titled "New Folder" and "Working". Within these folders are early versions of Goo Lagoon. The "Working" level is dated May 12, 2003, while the "New Folder" level was saved just a day earlier, on May 11, 2003. The final build of the level is dated September 18, 2003.
Both versions can be accessed by switching the level files (.HOP) of the final level with either of the early levels. However, these levels crash if you die or if you attempt to replace their other (.HIP) files, since all of the rather unfortunately-named .SIMP files in the early levels (which define most of the objects in the game) are missing 4 bytes that are present in the final level. Given that the "New Folder" version of the level was only saved a day after the Working version, the two areas are mostly identical.

Both builds are extremely unstable and crash easily. Instances that it will crash include:

In an emulator, you can usually avoid most crashes and the game will simply instead pop up a message notifying the user that something happened while trying to read/write data. The following are occasions where this would occur.

There are many differences between these two areas and the final Goo Lagoon: 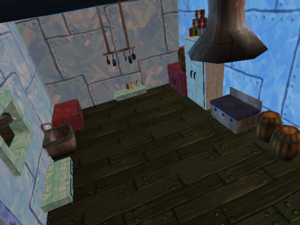 The Krusty Krab's kitchen is fully modelled but is only partially visible in-game.

Retrieved from "https://tcrf.net/index.php?title=SpongeBob_SquarePants:_Battle_for_Bikini_Bottom_(GameCube,_PlayStation_2,_Xbox)/Unused_Levels&oldid=1243715"
Categories:
Cleanup > To do
Subpages