The biggest addition to this game is World-e, a hub where you can access new levels...provided you have an e-Reader and the appropriate level cards. There were 38 level cards released in Japan, North America and Australia only got 12 before the e-Reader was discontinued, and Europe didn't get anything. You're welcome, Europe!

At least all of the World-e levels were included in the 2016 Virtual Console re-release. (Yes, including Europe and the three promotional levels!)

Stuff from the main game. Natch.

The unused animations of map Mario walking left/right and up have been updated again for Super Mario Advance 4, adding gloves to Mario's sprite.

Gloves were also added to the Hammer Suit sliding graphic.

These bonus tiles still aren't used. While there were three bonus games added to Super Mario Advance 4, none of them are the ones removed from the original game.

The original Spiny Cheep-Cheep graphics are still in the ROM. Seriously.

The bonus game intros were redone for this version, so these old Toad/Mario/Luigi graphics are no longer needed. Interestingly, the gloves on the small forms were not updated.

The updated eye clouds and double bushes are still present.

The corner pieces that aren't used in the NES version are still present, and still in their 4-color format.

Updated small cloud, but it isn't used. Ever.

The unused cloud corner tiles are present as well, unconverted.

A piece of foreground scenery? Let's update it, but not use it.

The multitude of unused desert tiles in the NES version still linger, unchanged in the tileset. Again.

The unused cloud corner tiles remain in the tileset.

There was a big cloud here. It's gone now.

This weird door frame or whatever it is was never deleted when the tileset was ported over. Twice.

The updated tire, spikes, and propeller from the SNES version.

These graphics from Super Mario World: Super Mario Advance 2 are stored in one block of the ROM. Unlike most of these graphics, these tiles are uncompressed, so they were not likely intended for World-e.

This font is found in the same block, with what appears to be a string for the game version.

A yellow version of the Cheep-Cheep enemy. They swim faster than normal Cheep-Cheeps, in a wave-like motion.

A faster green version of the Para-Beetle enemy, which can only be generated by the also-unused Para-Beetle spawner.

Unused sprites of the flying/winged Boom-Boom in the defensive position. In the final game, Boom-Boom continues flying around until jumped on, so these go unused. They are also present in Super Mario All-Stars.

World-e has more unused content than the entire main game!

Most of the unused backgrounds are variations of existing backgrounds. To view these backgrounds, use CodeBreaker code 33003BBF 00??, where "??" is one of the below. 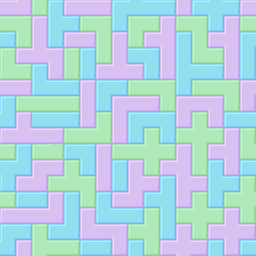 Background ID: 33
This background uses graphics found nowhere else in the game. Its ID is directly after the three new bonus game backgrounds, hinting that it might have been a possible candidate for a bonus game. It looks very similar to a texture seen in Shy Guy's Toybox from Paper Mario. 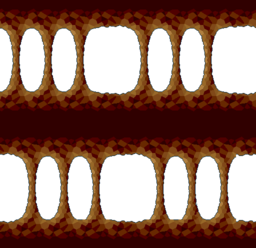 Background ID: 34
The standard cave background, with a second cave layer in place of a skyline. 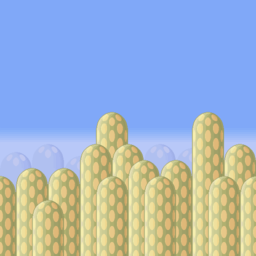 Background ID: 36
The hills background (seen in grassland levels) at a higher elevation. 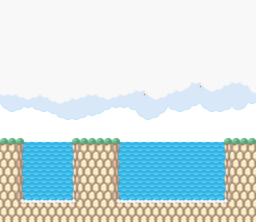 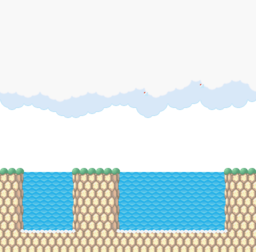 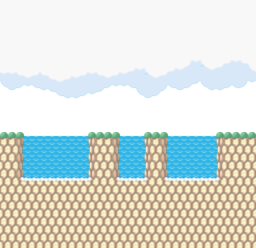 A grey palette exists for the e-Switches, present in both the e-Reader room and the World-e map.

These are stored in the ROM and should be displayed on the e-Reader screen when an e-Switch card is scanned, but this never happens. It's too bad, as these are some nice graphics.

The e-Cards make the game easier, the ?-Cards change the normal game in some way, and the !-Cards make the game more difficult. Note that the above image shows the cards for the e-Switches that were released (the ×2 points multiplier, the Mario damage modifier, the stronger boss health, and the harder enemy effects are separate cards, but controlled by a single Switch in the final game).

Similar graphics are found on the World-e map.

A number of additional e-Switch cards were planned, but remained unreleased. Their in-game effects can still be activated using the CodeBreaker code 83002D52 ????, where "????" is one of the IDs below.

No card image found
Switch ID: 0020
With this effect, the continuous enemy point bonus will start at 4000 instead of 100. This means that the player will start earning extra lives with the third enemy in a row.

Switch ID: 0004
With this switch active, all blocks that contain 1-Up Mushrooms will give three of them instead of one.

This switch will enable a cool feature when you fall down a pit: the first two times the player falls down in a stage, they will be raised out of the pit by a floating platform. The first time it will be two blocks wide (much like the similar winged platforms of Super Mario World), and the second time it will be only one block. Jumping down a pit a third time will result in death. 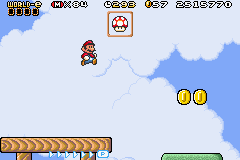 This switch effect will add a hold item box to the center of the screen, again like Super Mario World. Once you get hit, the item will drop down and a new one will be added. The item box will always be a Mushroom at the start of the stage.

The item can be any one of the following: Mushroom, Fire Flower, Raccoon Leaf, Frog Suit, Tanooki Suit, Hammer Suit.

No card image found
Switch ID: 4000
Any demo recorded with this switch active will have Mario replaced with Luigi when played back. If used during the main game in conjunction with the Luigi gameplay switch (4100), or during World-e, this will usually lead to Luigi dying.

A quasi-similar idea would be used in New Super Mario Bros. Wii as "Super Guide", where Luigi can play a level for you if you die enough times.

World-e is disabled by default in the European version, but not actually removed, and was even translated into other languages. It can be unlocked by exploiting a corrupted save.

Europe eventually got World-e when Super Mario Advance 4 was released on Virtual Console on March 10, 2016, and the language translations are thus used in that version.

Older graphics for the e-Coin and Advance Coin counters are loaded before the new ones take their place.

Two unused frames of the Advance Coin flipping. The text here translates as "rare", which could be the meaning of the R icon. The coin only has three frames of animation in-game, making it look rather awkward.

The loaded tiles for the Chargin' Chucks contains some graphics from Diggin' Chuck's Super Mario World sprite. Possibly a leftover as none of Diggin' Chuck's other tiles nor it's rocks are loaded with it.

An unused sprite for the Super Mario Bros. variant of the Hard Block, taken almost directly from Super Mario All-Stars. The final game uses a modified version of the sprite.

The castle that houses the e-Coins actually has three floors, but the latter two are never accessible. 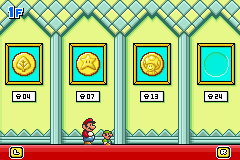 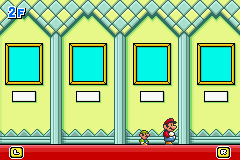 The upper floors are unlocked when an e-Reader level is marked to have a 9th and 17th e-Coin, respectively, and allows you to move up or down a floor by pressing L and R respectively. Since even in the Japanese version only eight e-Coins got released, these floors are never accessible.

A little block of katakana text that's stored in memory for a couple of frames before the level loads. マント translates as "cloak", and marks where the Cape graphics are stored.

"Trap replacement". This chunk of text is loaded for the bonus game intros.

Japanese text translating to "Will you save this course?"

Super Mario Advance 4 continues the habit of giving the international title screens a massive downgrade in quality. Also, the Japanese version has the "Single Player" and "Multiplayer" options in the top-left corner like the previous three games, while international versions move them down to the bottom.

The game was rereleased for the Wii U Virtual Console in 2016.

This version contains all 38 e-Reader levels built into the game, including the 26 that never left Japan. This normally isn't even possible with the original GBA version, as it's only capable of storing 32 levels at a time.

Interestingly, the scripts for the sleep function and rumble support were not removed, but they do not work correctly on the Wii U. In fact, the rumble feature goes unused because the game does not detect Game Boy Player hardware. The sleep function will work if the game is played on GBA hardware, and the rumble support will work if played on a Game Boy Player. 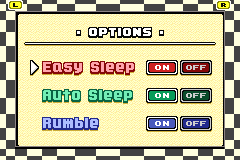