From The Cutting Room Floor
Jump to navigation Jump to search
Other languages:
English • ‎français • ‎한국어

There are six "unused" entries in the Debug Menu's level select for Versus Mode, but only two work without external codes. Note that most, if not all the unused stages use the song currently playing instead of their own song(s), of course because there was no music for these stages yet.

Crashes the game, though there are codes that can force it to load. The stage is simply Icicle Mountain without music. This was likely an unfinished Ice Climbers-related stage from Adventure Mode, as 10-2 comes immediately after "10-1ICEMT", in which the player climbs Icicle Mountain and fights the Ice Climbers.

Crashes the game. The name suggests it was Fire Emblem-themed, as Akaneia is the name of a country in the series, and the internal name for the Fire Emblem song in Temple is also AKANEIA. Sakurai confirmed on the Melee website that Akaneia was a cut stage. Catapults would launch stones at the castle, and a dragon and a summoner would appear.

There is no actual stage known as "Dummy" in the game's data, so trying to load this stage (usually done via the debug menu) crashes the game, though there are codes that can force a match to start when this stage is selected. The game will check during stage initialization to see if the file string pointer is null, and if it is, the game will initialize these values, creating what is often referred to as the Dummy stage. If this stage is forced to load, the entire stage is pitch black, with a single invisible platform at the center of the stage. While there are blast lines, they are located extremely far, thus it's impossible to get KO'd here since the game will crash due to players being too far away. The code for v1.2: Y07T-75KH-UX3X4 FKNZ-39HF-7XCTP 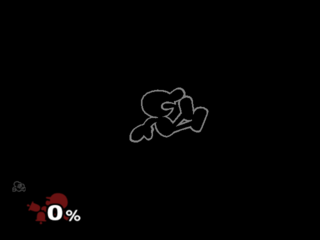 Crashes the game, though there are codes that can force it to load. It's exactly the same as 10-2, being Icicle Mountain without music. The name implies that it was going to be another Ice Climbers stage, possibly like the Summit stage in Brawl. Sakurai confirmed that there was another Ice Climber stage planned on the Melee website. The code for v1.2: K22D-EC8A-YWETG N3E9-E0YT-ARXBP 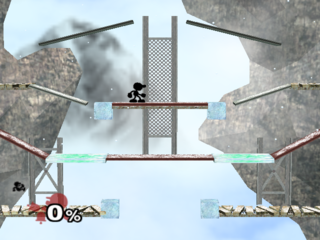 A large stage with untextured platforms, a few pits and floating platforms (some move vertically, some horizontally). The music that plays on this stage is borrowed from the Corneria stage. The backdrop is of a now-closed coffee shop in Palo Alto, California named Caffe Verona, now replaced with a Mexican restaurant named Reposada. Said backdrop is commonly used in 3D graphics, such as early editions of the OpenGL Programming Guide.

An untextured test stage for "Break the Targets". It was reserved for Sheik, who ended up sharing the level (and character) with Zelda. It's also possible that rather than a test stage, this was a template that served as a starting point for every Target Test stage. 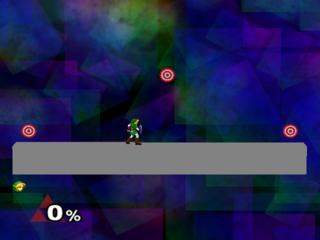 Also found within the Debug Menu are unused second-long intro sequences for all 25 characters, presumably intended for All-Star Mode. Go to MODE TEAM TEST > KIM and highlight ALLSTAR ENEMY, then press Left and Right to switch characters and A to view the intro. This is also the only way to view the opponent portraits for Sheik, Ganondorf, and Roy, as they're never fought in Classic Mode. However, Sheik can be fought in Classic Mode if the opponent is initially Zelda and transforms into Sheik. 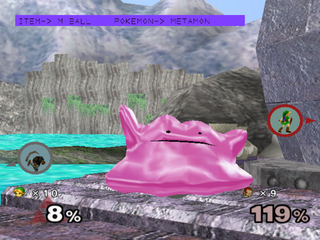 Using one of the Debug Menu's many tools, it's possible to choose which Pokémon will spawn from a Poké Ball. One of these Pokémon is Ditto, listed under its Japanese name of Metamon. If a Poké Ball containing Ditto is thrown, it will pop out, briefly shout its Japanese name, and vanish. Ditto was presumably removed late in development, as it is mentioned in the official Melee strategy guide. (A video of Ditto can be seen right here.) Only one instance of Ditto can be on-screen at a time.

Ditto was later properly implemented in Super Smash Bros. Ultimate: When summoned, it transforms into the fighter that summoned it and fights alongside them. This was likely intended to be its effect here as well.

The filenames appear to suggest that these animations were intended to play upon selecting a character, in a manner akin to the original Super Smash Bros. As Melee utilizes splash art on the character select screen (which would be the standard for every other game forward, possibly due to limitations for the possibility of several models on screen at once, especially during local 8-player matches) as opposed to the playable character models, there are no other situations these animations could appropriately be used in, ultimately rendering them unused.

The animations for various characters are noticeably unfinished — characters such as Marth and Young Link have their objects clip through their own models, while Ganondorf and Falco only have one static frame of animation.

Some of the "Selected" and "SelectedWait" animations were later reused in Super Smash Bros. Brawl as idling victory poses and as taunts.

A unique animation which is included in every characters animation bank, despite not being used by any of them. The actions depicted pertain to being temporarily stunned and blinded by an unknown item, while reaching out as if to grab onto something.

As no item in-game "blinds" the player in such a manner, it likely corresponds to an item cut from the game.

A second jab attack for Ganondorf, titled "Attack12", is present in Ganondorf's animation bank, although the animation is a duplicate of Captain Falcon's, almost certainly imported from Falcon's own archive.

The existence of this animation allows an unusual glitch to be performed in 1.0 releases of the game, where using a jab while under the effects of a Bunny Hood would trigger this otherwise-unused animation, revealing that no hitboxes were coded in for the move.

While Peach has no unused animations of her own, the filenames for her special moves appear to suggest that the commands for Vegetable and Toad were swapped around in development - the animation for Peach unearthing a Turnip from the ground is titled "SpecialN" (universally used for neutral B special moves), whereas animations corresponding to Toad (including Kirby copying the move) include "SpecialLw" as part of their filenames. Intriguingly, because of this change, Toad is the only counter special move in the series to not be mapped to the Down-B command, although it appears it was originally planned to be.

Master Hand and Crazy Hand were intended to have a fourth team attack, titled "Tagtsukamu" in their animation data. It would have been activated by inputting D-Pad Left + Y while playing as Crazy Hand. However, this will cause the hands to be stuck forever, as inputting D-Pad Up + Y as Master Hand will do nothing. Unlike the other team attacks, there are three other subactions associated with it, "Tagnigiru", "Tagshippai", and "Tagcancel". This would have been a grab move, as the normal grab subactions are named "Tsukamu", "Nigiru", "Shippai", and "Cancel". This attack is incomplete, as Crazy Hand has no hitboxes for the attack.

Here is a video of the restored move.

An unused animation for the character select screen which makes the icons for the six "clone" fighters (Dr. Mario, Ganondorf, Falco, Young Link, Pichu, and Roy) slide out from underneath the icons of their respective "base characters" (Mario, Captain Falcon, Fox, Link, Pikachu, and Marth) still exists in the files. This animation can be re-enabled with Gecko code 044dc578 00000000. 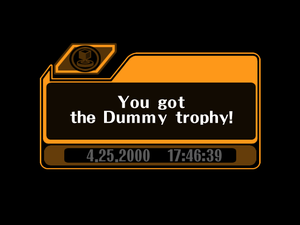 These can all be accessed (except the last two) via the debug menu under MODE TEAM TEST > KIM > GOHUBI ID or GOHUBI FIGURE. However, in the European version, none of these can be accessed with the exception of Trophy IDs 292 to 299 (which is exclusive to it). There are a few messages that are left unused:

Some Special Bonuses were left out of the game, though you can get these with an Action Replay.

Selecting "Yes" in the Game Over screen while having a choice to Continue without enough coins can make this option unselectable, causing the error sound effect to play instead of allowing the player to gain extra lives and continue onto the stage where it left off. Even if the game has these commands, it goes straight to a Game Over after the trophy lands onto the red lined table when the coins have been checked and the "Game Over" state is put in use.

Use one of the Action Replay codes below in the appropriate version to test out this occurrence when you go to the menu without the required coins to continue.

The video on the right shows that Giga Bowser was in fact playable at some point in development, albeit likely only for AI testing or to see if Bowser's files were successfully copied for Giga Bowser. The former is probably more accurate, as all boss characters are playable in some form using the debug mode. See the Notes page for the codes. Interestingly enough, this remains in Super Smash Bros. Ultimate.

The game sends a few debug logs to GameCube's hardware during the startup process, but this is never seen by a player by normal means. It is only displayed in game through the [crash debugger]. It's possible to view these messages in Dolphin by enabling the logging feature (View --> Show Log). Note that some parts of the log are based on the system the log was retrieved from, such as the system's set date and time when it was accessed ("GC Calendar Year"). The Language, DbLevel, and DATE are determined by the version of the game loaded and the developer functions enabled at boot. Below is an example of such a log:

The build date is displayed in the boot-up log message and the debug menu.

In boot.dol, the game's executable, there are a few interesting little strings.

Despite the game having files to load a different Ryota Hayami trophy dependent on region (TyWaveRace.dat and TyWvRcUs.dat), both feature identical trophy models. 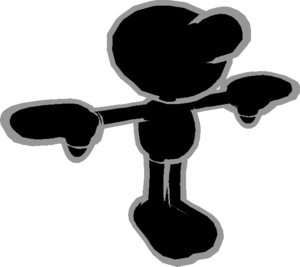 Mr. Game & Watch is a full-3D model like all the other characters. He's only flat because the game runs the flattening code on him at all times, like how everyone else is flattened on the Flat Zone stage. The grey outline is done by having a larger "shell" model with its normals pointed inwards so the inside is seen instead of the outside.