Also, there's a debug/level menu in this ROM somewhere. I don't know where, and it's supposedly disabled, but it's there. --

Fun Interesting fact: The unused levels from All-Stars and the NES game are still there...sorta. The level object and enemy format was changed slightly, expanding from 3/4 bytes to 4/5 bytes. So, the enemy groups of those levels is completely intact, but the actual level layouts were never converted. So they're unplayable. Which kinda sucks, but you have two other ways to play those levels so hey. --GoldS 21:58, 16 September 2010 (EDT)

I've been looking forward to this page ever since you first started uploading pics for it. Damn good job! Teflon 02:34, 17 September 2010 (EDT)

For this line of the text, apart from the first character that I'm not sure of (possibly the Arabic numeral '3'?), the rest is tensou, meaning 'transport' or 'teleport' (maybe it's 'transfer' here, considering that it's in the graphics). --Gilbert 01:51, 28 October 2010 (EDT)

Most games have a fixed graphics file size that most graphics are split into and loaded in different combinations as needed. As such, there's a constant number of tiles in a file. If you have too few tiles to fill a file, there will be padding, often placeholder tiles to distinguish from the tile(s) that are supposed to be blank. The amount of time and space wasted are normally insignificant, so there's no real motivation to do anything about this. The same goes for placeholder tiles that get overwritten during runtime with animations and similar. --Smallhacker 06:02, 14 May 2011 (EDT)

Both are used. 1st one can be heard when you're at the king's castle and see the animation of the Koopa Kid turning the king into something. It's quite rare to get, but I remember having it once. The 2nd one is easier to get, win at the roulette minigame, then redo it, and get the leaf. This fanfare will happen. --LuigiBlood

Couldn't get the first one to trigger on my completed file :(
Also now I understand why I hadn't heard the roulette fanfare as I am crap at it --SMA4Fan1

Here's how to trigger the "Koopaling transforms King" cutscene: Simply don't enter the castle at the end of the world (they can be avoided by using Warp Whistles) until you beat Bowser. When you enter them afterwards, you'll see the Koopaling appear to steal the wand and transform the king. — NES Boy 11:31, 31 January 2013 (EST)

I'm not sure if this is unused or not. It appears to be sprites that would have been unlocked with an e-reader. I've never used an e-reader though so I don't know. When the game loads the file select with the rising curtain, two sprites of a SMW style goomba are loaded into memory but aren't displayed. It looks like the top two right sprites found here. Can anybody confirm if this is used or not? --Cuber456 (talk) 22:53, 26 January 2015 (EST)

Yes, I'd say that those alternate SMW Goombas are unused, mainly because the ones in the e-reader stages use the slightly-redrawn yellow-shoed ones that appear in the top-middle of that same sheet. -Geno2925 (talk) 12:41, 27 January 2015 (EST)

Hmm I wonder if it would be more proper to say that there are unused palettes of the SMW goomba then. The same could be said for the SWM style koopa because that is also loaded along with the goomba into memory.--Cuber456 (talk) 14:39, 27 January 2015 (EST)

It seems to be Mario literally losing everything BUT his legs and feet, complete with is remaining organs inside. Luigi has his shirt and his organs covered though. These were most likely cut for obvious reasons. Or the top of these sprites are just the top tiles of Mario and Luigi's caps.

To find these sprites yourself, put in these Code Breaker codes:

Pause the game in a level and keep pressing Select until you find the sprite!--SMASH SMASHES ITSELF WHEN MegaSuperab JOINS IN!! (talk) 17:43, 29 November 2015 (EST)

Just a quick question about the Wii U Virtual Console release of this game, for anyone who is able to extract Wii U VC ROMS. Is it just the regular ROM with a special save file pre-installed with the e-Reader levels in it, or is it actually hacked to give access to all of them from the start? I'd really like if it were the latter (and if so, if a patch would be made to make regular SMA4 ROMs into the edited version). I'd love to have a ROM copy of SMA4 where I wouldn't have to go through the awkward process of emulating the e-Reader communication and card scanning... - Geno2925 (talk) 19:53, 21 January 2016 (EST)

On GBAtemp, there's some patches for different versions of SMA4, if you want to try them. It seems that all the data is actually stored in the ROM, but I don't think anyone has checked a vanilla save against one from this game. Might want to look into that. --Team Fail (talk) 17:19, 23 January 2016 (EST)

After doing some hex editing, it would seem that filling up all three floors in the e-Castle does nothing. No special bonus/reward. When going to the different floors, the music will glitch out and nothing more. OMEGA48 (talk) 19:12, 9 June 2016 (EDT)

The forest background appears to be used in "Slidin' the Slopes," in the bonus room where the third Advance Coin is. Here's some proof. I'm gonna go ahead and remove it for now. — The preceding unsigned comment was added by DangItBobby (talk • contribs)

Somehow, when you press Left+Right inside the World-e castle, Luigi dies by going off-screen. When you exit it after the death sound is done playing, a level pops up on the screen. When you enter that level, the game freezes on "MARIO START!". If you decline instead, you go to the World-e level selection. If you choose a level, when you start, you get ejected from the level immediately. Everything is normal after that. --Mario3264 (talk) 14:25, 14 August 2016 (PDT) 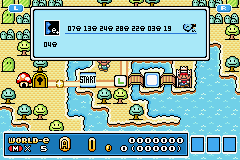 I know for sure that there's a debug menu in the game, I saw it after I loaded my copy sloppily into my GBA a few years ago. I don't have much information on it, but I know it's in there somewhere. IIRC it was a solid black background with white text. — The preceding unsigned comment was added by Topolos (talk • contribs)

Are you sure this was a debug menu and not a crash handler screen? There is a difference.

Someone found a/the debug menu in 2016. I've made some documentation on it, but someone with reverse engineering knowledge should probably look at it. --Hiccup (talk) 18:08, 21 February 2018 (EST)

So, this has been something that I've been thinking about, for a while... There are e-Switches for every bit-byte combination possible; $1, $2, $4, $8, etc, all the way up to $4000. These bytes can be added to the RAM address of $3002D52 to enable the various effects. Now, as I said, these individual values go all the way up to $4000 and, if you enable every single function, it adds up to $7FFF. However... there is one more individual value available.

$8000 can be added to any of the other values and adding them to the entire lot brings the address' value to $FFFF. Doing this works just fine, as does setting the value to just $8000. However, $8000 doesn't seem to have any discernible effect... so, I was wondering: has anyone figured out what, if anything, that value does, yet? I kind of expect it to be just a "nothing" value, but it'd be neat, if someone found that it did something.

I've noticed that after beating the game without clearing every world (best way is with two warp whistles obviously), once you return to said uncleared world's castle, a cutscene will play similar to the opening cutscene in which the world's Koopaling attacks the King, which uses the standing and knocked back sprites. The Koopaling then leaves just in time for Mario to arrive. So aren't they technically used? It also uses a remix of the SMB1 castle theme which I find neat.

UPDATE: I found a video of this in action.

— The preceding unsigned comment was added by EXEcutorTheBat (talk • contribs)

I managed to find the debug menu by enabling the cheat code for it on the main menu then disabling it. I used code 03003774:34 in the VBA emulator for anyone that's curious. Here's some screenshots...

The interesting thing to note is that all of the options leads to various level selectors that upon selecting a level just freezes at the Mario Start screen.