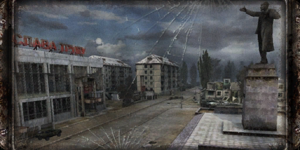 Many locations were cut during S.T.A.L.K.E.R.: Shadow of Chernobyl's development, including the 'Dead City'. While the Dead City cannot be found in retail builds, it exists in prototype builds such as build 1935 and 2571. While build 1935 has the location primarily inhabited by hostile mutants, build 2571 instead has the bases of the mercenary and bandit factions located here. Build 2571's Dead City was also the original meeting location for an important character known as the Doctor, before this encounter was moved to the Agroprom Underground level.

Despite this location being cut, this area can still be seen on the game's PDA map and on a map in the Freedom base. One of the few surviving elements of this level in the retail game is this loading screen.