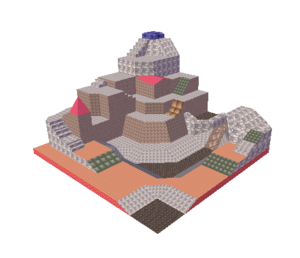 Super Mario 64 was Nintendo's first 3D Mario game which introduced players to 3D movement and was a major influence on how 3D games should control.

On 25th July, 2020, a large amount of internal data owned by Nintendo was leaked to the public, apparently originating from either iQue-owned servers or a backup of them. The 25th July, 2020 leak included a portion of Super Mario 64's source code, featuring a large number of early and unused assets; while the code appears to specifically be for the Shindou Pak Taiou version of the game, it includes unused assets not seen in any released version, some of which seem to go as far back as 1995.

sm64\map\stage1\castle\castle_shape.sou was a scrapped stage briefly seen in a Japanese Nintendo 64 promotional video from 1995. If the map and its object data are loaded into the retail build of the game, a textureless water plane is put in the channels on the bottom of the level, which is caused by the level utilizing an outdated version of the water system. There's a clone of the level in the stage99 folder which seemed to have been used as a test level (which originally was stage37, but it got replaced with another test level) where single coins are placed sporadically around, with a Power Star also spawning on the top blue platform, just outside of Mario's reach (though this may be due to physics differences in the final build compared to the demo).