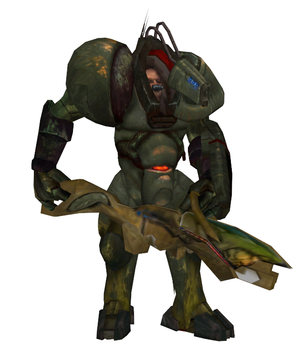 The September 26, 2003 build of Half-Life 2 was compiled more than a year before the game's release. It, along with the Source Engine's source code and several other Valve-related files, were leaked by Axel Gembe, a German hacker who had managed to get into Gabe Newell's account because of an easy-to-figure-out password and began collecting and monitoring what Valve was up to. When Valve discovered they'd been compromised and cut Gembe's connection in late September 2003, he quickly released what he could online before authorities apprehended him, including this prototype.

In-game, the Combine Guard is invincible to everything, even though he spews yellow alien blood from the original Half-Life when shot. His gun is extremely powerful and can kill the player in one hit. He also tends to kill any enemies near him as well.

The code for the Combine Guard mentions that the game would track separate armor pieces on the Combine Guard, each with 50 HP. These armor parts would be on the enemy's left thigh, right thigh, left shin, right shin, torso, arms, and lower torso. These would have to be destroyed in order for the battle to progress. Damaged parts would produce smoke, and destroying them would cause an explosion. The Combine Guard could also enter a "Clobbered" state, during which the game would select a random bit of leg armor and destroy it. If all of the armor parts were destroyed, the Combine Guard would enter a "helpless" state, presumably allowing the player to defeat him much easier, given the message that would be printed ("NO!!!!!!!! I'M DEADZ0R!!") when he enters his Helpless state.

This enemy has special animations for the e3_Terminal map, which only exists in the WC Mappack.