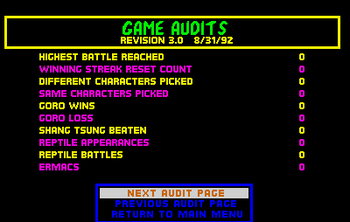 Present in the Mortal Kombat audit menu (but only in the Y-Unit versions) is a listing for "Ermacs" which, due to being under the Reptile listings, started a popular rumor that Ermac was a hidden character that would be fought/unlocked when certain conditions were met. In reality, "Ermacs" refers to "Error Macros", a log for the developers for when the game crashed unexpectedly...but in the final version the counter can't actually go up and is just for show.

A little more background for this could be found in GamePro Issue 054 January 1994 page 34, where Ed Boon compares it to the Smash TV Warp Zone glitch. It would basically recover the system and put you back in the game, but the game creators called that glitch the Hidden Key Room. 'Ermacs' which are shortened from 'Error Macro' is similar to that. A programming technique to quell user errors (such as entering numbers when only letters are accepted.). What Ed did was by putting a counter of those errors that started in Smash TV, he decided to put a counter in the prototype revisions (listed as Error Traps) and later called it Error Macros, which led to the famous ERMACS counter. He even admitted this was not a character, but a counter for traps.