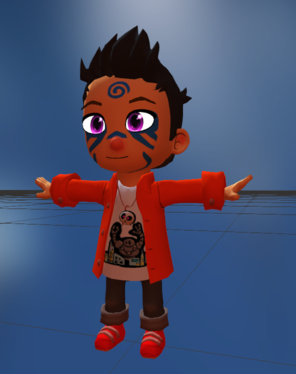 The story of a kid and A Hat in Time, on a quest to get back home in time for dinner and cookies.

Pictured here is Timmy, who was originally intended as a villain-esque character with psychic powers that would hinder you in "Vanessa's Manor". His role was swiftly changed as he became Hat Kid's co-op character for a pretty long time. Just like Hat Adult, Timmy comes with a deprecated player script and his own hat (Which was used in the level "Ship Shape"). Other than that, he's hidden behind the ice cave in the credits. There was quite a lot of work done on this co-op partner, as voice clips of various characters addressing the main character as 'sir' and 'man' could also be found in the files.