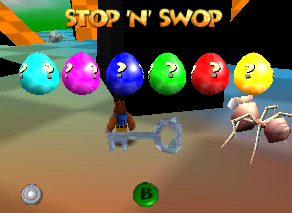 In Banjo-Kazooie, if the player collects all of the Jiggies and then beats Gruntilda, Mumbo will show pictures of two Eggs and one Ice Key during the ending. These and four more Eggs can be obtained by using secret built-in codes.

As soon as the player collects one of these, a new menu called "Stop 'n' Swop" will appear at the very end of the game totals, which shows all the secret items collected so far. None of these items have an effect in-game; they were intended to be used in various Rare-developed Nintendo 64 games by quickly swapping the cartridges after turning the power off, hence the feature's name. Each egg corresponded to a different game, and transferring the Ice Key to every game and back would unlock a final, grand bonus. Unfortunately, due to technical limitations, the feature had to be scrapped - the feature depended on powered-off N64s retaining Rambus memory for 10 seconds, but newer models starting in 1999 reduced the time down to just 1 second, and attempting to swap one cartridge for another and turning the power back on within this time would be exceptionally difficult. The only game known to contain any remnants of the feature aside from Banjo-Kazooie is Donkey Kong 64, which has data relating to the Ice Key. (Paul Machacek confirmed on Twitter in 2020 that Stop 'n' Swop was functional between Banjo-Kazooie and Donkey Kong 64 when Nintendo told Rare the idea wasn't feasable.)