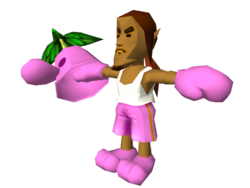 Super Mario Sunshine is an open-ended platformer, very similar to Super Mario 64, except on a tropical island and with a talking water pump. This game also marks the first appearance of Bowser Jr.

After 18 years without a rerelease, a slightly updated version was released on the Nintendo Switch as part of the Super Mario 3D All-Stars collection on September 18th, 2020.

While Il Piantissimo never removes his mask, he does have a complete face, which can be seen if you remove his mask via hacking or other methods. Interestingly, Piantissimo's face resembles the Running Man from The Legend of Zelda: Ocarina of Time (and by extension the Postman from Majora's Mask), but with an angrier expression, darker skin and a goatee.