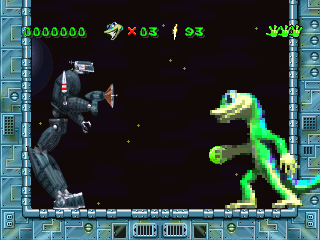 This Gex level is accessible only through a unique level select cheat. At the title screen, hold Right Shift and press Left, C, Down, A, B, C, A, B, C, A, B, C, C, B, A. Select SL71 from the menu that appears and you'll be taken to an unfinished boss fight.

The level features a unique scrolling background (that includes the ships from the hidden shooter minigame) and plays the secret ending music. The boss itself is a large mech with a working shrink ray. Getting hit by its beam will cause Gex to shrink, which impacts your movement and jumping. Being shrunk too much will render the player immobile until they are killed.

The mech slowly walks forward, fires the shrink ray several times, then steps back and fires the weapon again. After this, it will jump forward to the left side of the screen (damaging the player if they are jumped over, due to unfinished collision detection), which causes a green power-up to fall from the sky. It then turns around, repeats its attack pattern, and jumps back to where it started. The entire pattern repeats infinitely, bringing a power-up down with each loop. Eating the power-ups will cause the player to grow in size. Once you are large enough, you are able to damage the boss with your tail whip and bounce attack. Hitting him three times at a sufficient size will destroy the mech, but leave you stuck in the level.