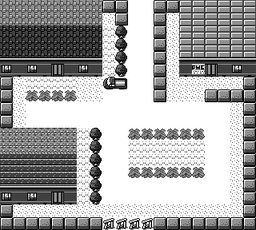 In April 2020, a leaked copy of the source code of Pokémon Blue was released on the internet. The source code was found to contain a sea of pre-release material detailing the development of Generation I.

A large amount of maps were archived in the source code, albeit with a lot of them being subject to what was either corruption or incorrect parameters. Despite this, these maps give us an incredibly informative glimpse regarding how the region of Kanto evolved over time.

This image shows a town that was scrapped early in development, and likely corresponds to the area referred to as "C" in the design documents. What was seemingly alluded to as a city the size of Saffron City turns out to be a town the size of Pallet Town, with the purpose of this area still as unclear as it was before. Worth noting is that this map is the only place in "V1 Kanto" where a truck is found, the exact same graphic still present in the final games, found offscreen in the Vermillion City harbor.