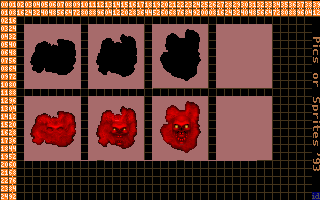 Doom is the game that didn't start it all, but it might as well have. Almost a licensed game based off of the second Alien movie, it wrote the FPS canon and became a worldwide phenomenon, paving the way for many "Doom clones" and eventually Quake.

Dubbed "The Blob", this monster concept would spawn off any wall, animate, and spawn a Lost Soul. Its spritesheet was retrieved from a backup image of one of id's NeXT development servers by an anonymous source. The spawning Lost Soul graphic would later be reused as the inside of the Pain Elemental's mouth in Doom II.