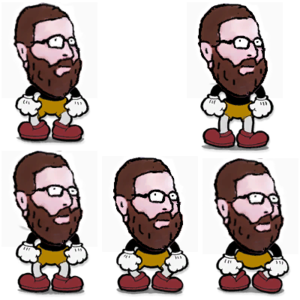 Inspired by 1930s animation (specifically the works of Max Fleischer, Walt Disney and Ub Iwerks) and tough-as-nails platformers such as Contra, Cuphead is a run 'n gun platformer/boss rush game in which you play as two brothers who have to collect soul contracts from various people, or else the Devil will take their heads.

Hidden inside the game's data is "jaredhead", a completely new and original character based on a cut-out of StudioMDHR Entertainment founder Jared Moldenhauer. The head itself was taken from a video interview. This happens to be a leftover from when one of the developers cartoonified Jared's head as an in-joke.