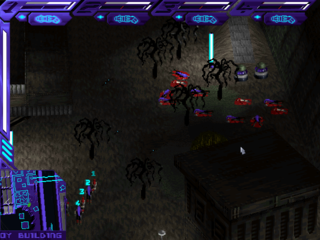 Syndicate Wars is the sequel to Syndicate, if you couldn't tell already. Compared to the original, it features more detailed cyberpunk environments in 3D, new weapons, and some very interesting missions.

Pictured is a mission from the cut campaign for the Unguided, the punk rock styled citizens rebelling against both the oppressive Eurocorp and sinister Church of the New Epoch after their controlling Utopia chips fail. Little is known about the Unguided campaign, why it was cut, or how it would work in-game outside of the actual missions.