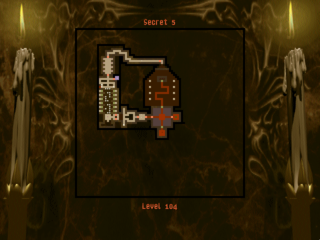 Dungeon Keeper is a strategy video game that was the last to be developed by Bullfrog Productions under Peter Molyneux.

In the game, the player attempts to build and manage a dungeon or lair while protecting it from (computer-controlled) "hero" characters intent on stealing the user's accumulated treasures and killing various monsters. The game was met with high critical praise and positive gamer reaction, resulting in a sequel being made.

There are six possible Bonus Levels to be located in the game, including the "Moon" level. However, you can only gain access to five of them in unmodded games.

The "Locate Hidden Realm" bonus crate should have been located in Level 14, "Sleepiburgh", to the opposite side of the "Transfer Creature". The crate itself is not in the game, possibly due to a mistake by the programmers where they forgot about it or (accidentally) erased the crate.