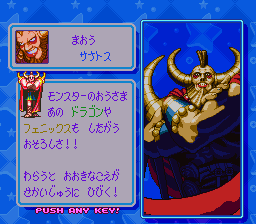 Tetris Attack is a re-branding of Panel de Pon, a cutesy puzzle game featuring fairies. However, due to the (mis)usage of the Tetris license, the rebranded version of the game has not seen a re-release. The original Panel de Pon would be released internationally on the Nintendo Switch Online service 25 years later.

Pictured is an unused bio for Thanatos. While all other characters have bios seen by waiting on the title screen, bios for Thanatos and Corderia can only be seen by going to an options menu, which requires hacking to access.