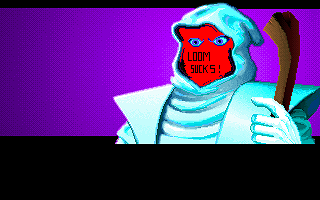 Loom (DOS) is a rather simple graphic adventure game in which you, Bobbin Threadbare of the Guild of Weavers, learn magical, musical powers and eventually flee from Chaos in an unsatisfying ending. Moreover, the CD release saw significant cuts to the dialogue and took some liberties to the visuals.

Pictured is an unused close-up portrait of Atropos, intended for the VGA CD-ROM release. The artist also snuck in a message in this portrait using a spare palette entry. That said, a similar portrait was used in the FM Towns version, which also features 256-color graphics.