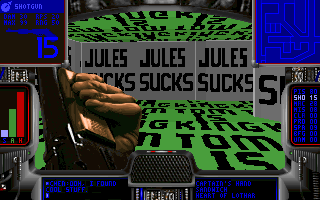 Doom is a legendary FPS that wrote the FPS canon and became a worldwide phenomenon, paving the way for many "Doom clones" and eventually Quake.

Pictured is a tech demo for the game made in February 1993. The player can change the floor and wall textures, which includes two textures depicting some in-office drama. There was a lot of tension between Tom Hall and some of the Id guys during development (Jules being Adrian Carmack). Hall left (see: was forced out) before the game's release.