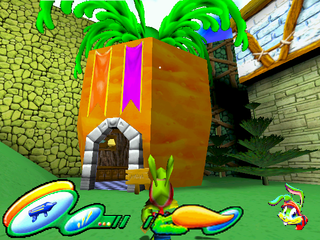 Jazz Jackrabbit 3 was set to be Jazz's first 3D game. featuring the return of Spaz and Lori as playable characters plus the introduction of Eva's cousin Razz, who would help create various items for the team. However, the game was not picked up by any publisher, likely due to the underwhelming sales of Jazz Jackrabbit 2.

Pictured here is Carrotus Village, the first level the player is dropped into when they begin the game and one of the more complete levels from the leaked alpha build. An early version also exists in the prototype's data with less polished visuals.