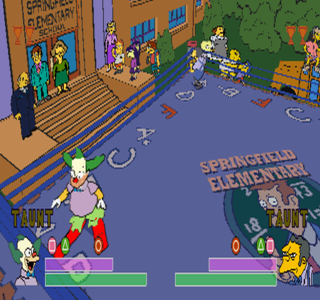 The Simpsons Wrestling is a licensed wrestling game featuring characters from The Simpsons.

There is a full but unused arena based on Springfield Elementary School in the game's data. It can be seen by swapping the text krusty.s3d with school.s3d in BIG.BIN, which will cause the game to load the school level instead of the Krustylu Studios level.
According to a post on the website of level designer Mike Ebert, this arena was cut following the Columbine Massacre.