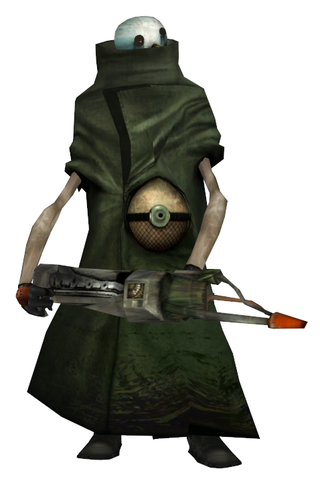 On October 2003, a build of Half-Life 2 was leaked from Valve's servers in a severely unfinished state. The build contains many assets that were removed from the final game.

Among the assets cut is the Cremator; a tall humanoid creature with a white head, human-like arms, a green cloth around him, and a circular object in the middle of his stomach. He wields the Immolator weapon. According to a description in the book Raising the Bar, the Cremator would patrol the streets of City 17, using his Immolator to clean up the streets. His weapon could also be used against citizens if need be. The Cremator's head was reused in a prop in Eli's Lab in the final game, but Eli makes no mention of the Cremator if he talks about the head.