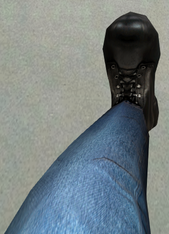 Duke Nukem Forever is notorious for its protracted development cycle and less for the underwhelming quality of the final game. On May 2022, prototypes of Duke Nukem Forever dating from August and October 2001 were suddenly leaked.

Pictured here is the iconic Mighty Foot from the October 2001 prototype. It can be used as a separate weapon or as via a hotkey (~ by default), just like in Duke Nukem 3D. Duke will kick with his left foot, no matter what button is used. The Mighty Foot does a low amount of damage, but can be used to open doors. The final game cut this weapon and replaced it with weapon bashing via a hotkey, though remnants of it can be found in the game's files.