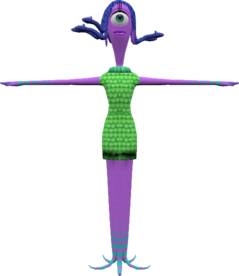 Monsters, Inc. on the PlayStation 2 suffered from unrealistic deadlines and a developer unprepared to develop for the PlayStation 2. The developer was shut down shortly before completion and the final product got a cold reception. The source was eventually found and released in 2019.

Found among the models in the source code was a model for Celia, who only makes a vocal cameo in the final game. One level she was likely meant to be in the "corridor" level (her model can be found in "Corridors_01.ma" in the assets), as well as the scrapped mini-game "scrnshr" (known as "Simon Says" and "Scrnshr" in the assets).