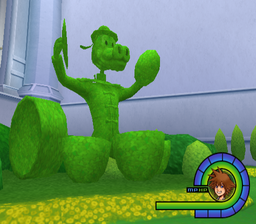 Kingdom Hearts is a game where you play as a kid named Sora who is trying to find his friend. Did we mention that you get to fight Disney characters and Heartless with a giant key?

Pictured here is Disney Castle, which was originally intended to be a playable area. In the final game, only a small portion is seen, but the whole area is modeled and includes details not seen normally like a topiary of Horace Horsecollar holding cymbals. Horace, himself, would appear in later games.