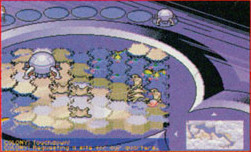 Genewars can best be described in contemporary terms as to what would happen if you spliced the DNA Command & Conquer with that of Spore.

Pictured here is an exceptionally early look at the game, provided by the February 1994 issue of CU Amiga. The screenshots show that at this point the game seemed to be entirely in 2D, representing each planet as a hexagonal board similar to Blue Byte's Battle Isle games. It was also called Biosphere, a name only mentioned in the command line help in the final game.