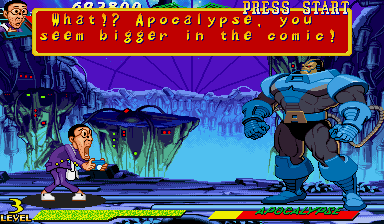 Marvel Super Heroes vs. Street Fighter is the second entry in the popular Marvel vs. Capcom series... somewhat, it's really just an altered X-Men vs. Street Fighter. It's notable for having a roboticized version of Akuma and a region-exclusive character not seen before or since.

Pictured here is that region-exclusive character, Norimaro, who is based on comedian Noritake "Noritaro" Kinashi. While his text is largely translated into English, the only way to access him in international releases is to modify the game's memory. This exclusivity was due to objections from Marvel over the character's presence. Moreover, there are several hints in the game and in prerelease footage to less savory aspects.